Here are some pictures of Houdon's Seated Voltaire, the beautiful centrepiece of the Musée Voltaire at Les Délices in Geneva, which I was lucky enough to visit last Easter.  This version is among the finest examples of Houdon's famous statue, and is particularly unusual in that it is made of terracotta. 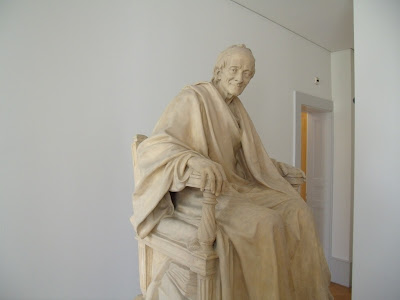 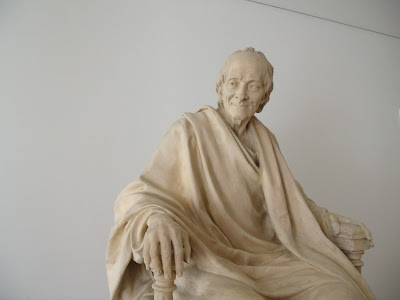 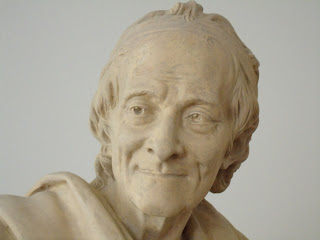 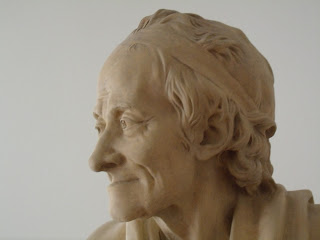 The statue was acquired for the museum by Theodore Besterman in 1957.It is signed and dated "Houdon. Fecit. 1781". It is thought to have belonged to Beaumarchais, and to have once stood in the antechamber of the salon in the magnificent Hôtel Beaumarchais, boulevard Saint-Antoine - where Beaumarchais also had an extensive garden with a pavilion dedicated to Voltaire.
See:  Galignani's Paris guide: or, Stranger's companion through the French metropolis (1822), p.221

The Hôtel remained in the Beaumarchais family until 1818 when the property was bought by the municipality of Paris and demolished to make way for the Saint-Martin canal.  According to Besterman the statue itself was subsequently recorded in the possession of a demolition contractor called Fossard.  It was then owned by an antiquarian from Asnières who sold it to on to one doctor Ledoux-Lombard.  Later it was accepted by a  furniture storage business (garde-meuble) in payment of an outstanding debt. There is no clear dating for any of this (at least in the summary information available online). The piece was finally auctioned by Drouot in 1953  and again in 1957 when Besterman persuaded the muncipality of Geneva to finance its acquisition for the Institut et  Musée  Voltaire.

The provenance is not absolutely watertight.  The identification with Beaumarchais's Voltaire has been challenged by Guilhem Scherf,  curator for the Department of Sculptures in the Louvre and an expert on terracottas, who points out that the inventory taken at Beaumarchais's death described his statue as  "plâtre bronzé".  The staff at Les Délices  argue that painted terracotta is easily mistaken for plaster - indeed the statue was identified as plaster by Drouot in 1953.  In 2004  the remains of bronze colour could be seen on the front, the rest  of the statue being tinted ocre. You can see this clearly in older photos on the internet (see left) . I think it has now been completely cleaned - since it is a uniform, almost marble, white. 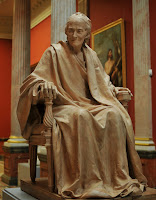 The only other major example of Houdon's Voltaire assis in terracotta belongs to the Musée Fabre in Montpellier.  This is almost certainly the statue described in the catalogue for the sale of Houdon's studio in October 8, 1795 (no.88).  It was acquired by the antique dealer Abraham Fontanel and in 1803 installed with great ceremony in his private museum in Montpellier.  During restoration work it was found to have been fired in several separate pieces; the chair is of plaster and the whole assembled on a base of planks supported by a wooden frame.  This differs from the present statue which, as Besterman emphasised, is all of a piece.  The legs of the chair are infilled (with a representation of a pile of books) to give strength, a solution echoed by the sculptor James Pradier whose  bronze statue of Rousseau in Geneva was inaugurated in 1835.

I recently came across these photographs in the Frick Photoarchive which show a very similar terracotta Voltaire signed and dated "Houdon. Fecit. 1781". 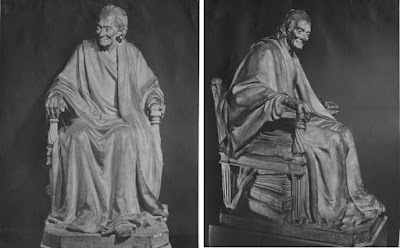 The provenance notes are as follows:

(f) Senator Roy de Loulay, Castle of Mornay (Deux Sèvres);
(f) not sold in 1895 with contents of the Castle, but purchased later in Paris, from the previous owner's son;
(f) by 1932, for sale in New York at the Ferargil Galleries;
(f) by 1937, owned by Souffice, dealer, Galerie Voltaire, Paris.
Present location unknown.
Without dates for Besterman's provenance, it is hard to be certain, but I think in all probability this is the same statue.