Memories of Lafayette: the Château of La Grange-Bléneau 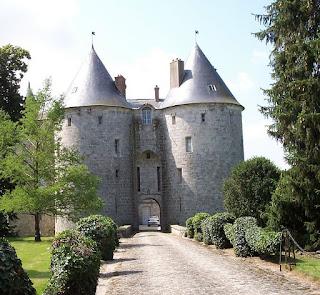 La Grange-Bléneau is the foremost site in France with Lafayette associations.

The 14th century manor in the municipality of Courpalay, in the department of Seine-et-Marne  belonged in the 18th century to the d'Aguesseau family. Lafayette's wife Adrienne de Noailles  reclaimed the property from the estate of her mother Henriette d'Aguesseau towards the end of the Revolution and gave it to Lafayette, who lived there from 1802 until his death in 1834.  Lafayette added a park by Hubert Robert. The château was lived in, virtually untouched, throughout the 19th century by the family of Lafayette's grandson Jules de Lasteyrie.  In 1935 it was purchased by the comte René de Chambrun (1906-2002),himself  a direct descendant of Lafayette's daughter Virginie Lafayette de Lasteyrie.  Chambrun was a successful international lawyer and longtime president of the crystal and glass firm Baccarat.  His mother was Ohio-born Shakespeare scholar Clara Longworth. Chambrun, however, had more politically suspect connections. In 1935 he married Josée Marie Laval (1911-1992) daughter of Pierre Laval, and it was Laval who provided the money to purchase the château. In the post-War period Chambrun defended his father-in-law vigorously and was himself was tried for treason but acquitted. (Chambrun's nephew Nicolas Longworth had the dubious distinction of being both Pétain's godson and Theodore Roosevelt's son-in-law.)

In 1956 Chambrun and his wife found huge cache of Lafayette's long-lost letters, documents and books in fourteen walled-up attic rooms at La Grange:
The discovery is described by André Maurois as “resembling a fairy tale.”

They entered into the Lafayette library at the top of the northwest tower. Not a single object had been moved. The mail from the general’s last days was in the drawer, unopened. Handsome books offered to him by the American states were lined up on the shelves; the gold of their bindings gleamed brightly as if new. In the drawers they found the general’s seals, his dear recollections of Washington; in the attics of the Polish Corridor, thousands of letters written by him, by his relatives, by his wife, by their children and grandchildren. [Preface to Adrienne The Life Of The Marquise De La Fayette (1960)]

Chambrun spent the next forty years collating the find. He gave only limited access to the scholarly community.  Maurois was allowed to use the collection to write his biography of  Adrienne (1961) and in 1977 Chambrun himself published a book of Lafayette's prison experiences. 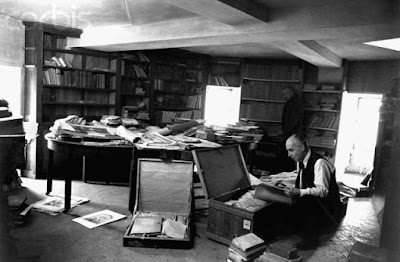 In 1996-7 the Library of Congress acquired a $300,000 federal grant to microfilm the collection. Permission was finally given with the proviso that the originals were not to leave La Grange - the work was carried out entirely in the kitchen, the only room in the château with heating and electricity.  The result runs to sixty-four reels or 6,400 feet of microfilm.(MSS 83808).  Cleveland University acquired a copy of the microfilm in 1997. The Archives de France also has a complete set (729 Mi 1-64)


The Fondation de Josée et de René de Chambrun, which was created in 1959,now owns and oversees La Grange, as well the Laval family property, the château de Châteldon in the Auvergne.  It operates from the De Chambrun's former Right Bank apartment. The French press was not slow to point out the family ties of  prominent members of the Foundation  with Pierre Laval and to voice fears that the memory of Lafayette might be annexed by the extreme Right - especially when it was rumoured that the Foundation was behind moves in 2007 to have Lafayette's ashes transferred to the Pantheon.

The purchasing power of the Foundation is considerable.  In 2007 it sold its shares in Baccarat for more than $70 million dollars with a further payment of $25 million or so in 2009. In 2008 came the acquisition of  Washington's Cincinnati medal for $5.3 million. There have been further strategic purchases.  In June 2010 the sale by Christie's of the collection of the banker Arthur Georges Veil-Picard afforded the Foundation the opportunity to recover several notable pieces which had originally belonged to La Grange.  Among them were an oval pastel of Lafayette in his National Guards uniform by Jean-Baptiste Weyler and two interesting watercolours by Jean-Pierre Houel depicting  commemorations of the fall of the Bastille.  Also recovered was  Ary Scheffer's portrait of Washington which  was the centrepiece of the main salon where Lafayette exhibited paintings and souvenirs of his American friends. 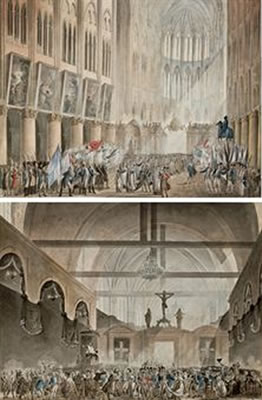 Lot 164:  Watercolours by Houel: blessing of the National Guard flags in Notre Dame in September 1789; memorial service in the Church of the Sepulchre (attended by the Lafayettes) in August 1789.
From the public point of view the return to La Grange of these items is a mixed blessing. Lafayette's patrimony may be safeguarded, but  there is some danger of it disappearing from view. Admittedly, the Foundation has made considerable efforts to encourage cordial relations with the United States. Laura Bush made a stop at La Grange as part of a three-day visit to France in 2007, and several items were lent to the 250th anniversary  commemorative exhibition organised by the New York Historical Society this year (though not, as far as I can tell, the $5 million medal).  However, apart from old auction records, there is little current information on the internet concerning items in the La Grange collection.  Not only is the château closed to the ordinary public but all interior photography is forbidden.

Photos of the exterior of La Grange in 2004 on the Picpus website
http://picpus.mmlc.northwestern.edu/mbin/WebObjects/Picpus.woa/wa/displayDigitalObject?id=1111