A portrait of Louis XVI by Kucharski (and other royal portraits)

At the end of September 2015 the sale took place at Christie's in Paris of over a thousand pieces from the collection of the author and TV producer Jean-Louis Remilleux.  In 2012 Remilleux bought the 18th-century château de Digoine in the department of Saône-et-Loire with the intention of restoring it and opening it to the public.  The sale was to finance future restoration work in the stables, gardens and outbuildings and ensure the preservation of a magnificent 19th-century private "théâtre de société”.  The most expensive lots were mostly furniture:  a settee stamped by Mathieu Bauve was estimated at €350,000-€450,000.

Lot 101:  A portrait of Louis XVI by Alexander Kucharski 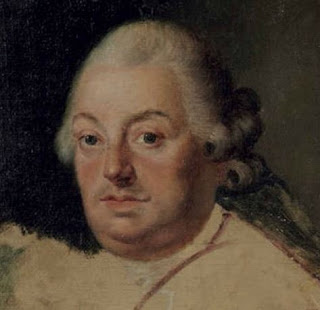 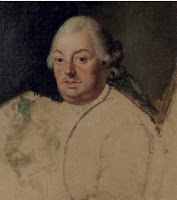 For me by far the most striking lot was this disconcerting portrait of Louis XVI by Alexander Kucharski. The only provenance given was the previous owner, the designer Karl Langerfeld, who had sold it in 2000.  I found the catalogue for this sale but that too contains no details; indeed it claims only that the picture was "attributed to Kucharski".  The price fetched in 2015 was comparatively modest -  (€6,250) - suggesting that provenance is indeed uncertain.

The picture, which is clearly unfinished, is oil on canvas laid down on board. It measures 26 cms by 24 cms. Inevitably it is tempting to speculate that the portrait dates from Louis's final months at the Temple when Kucharski painted his famous studies of Marie-Antoinette and Madame Élisabeth. Or possibly it is an abandoned pendant to the (?posthumous)  portrait of  Marie-Antoinette which now belongs to Jacques Larcia?  (see  http://rodama1789.blogspot.co.uk
/2014/09/is-this-face-of-marie-antoinette.html).

Surely an expert could tell us more? Either way, there are no other Kucharskis of the King that I know of, and it is a striking image - though  the air of startled vacancy may be an effect of the slightly awkward perspective. For comparison, here is Ducreux's Louis which is generally reckoned to be Louis last attested portrait. 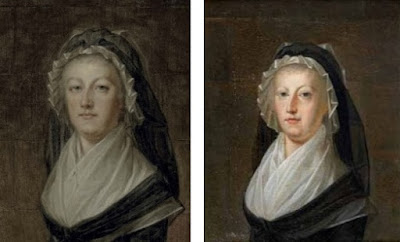 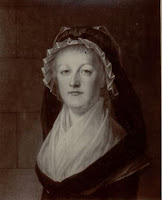 Lot 102 is also mysterious.  It is an example of Kucharski's famous, and oft copied,  portrait of Marie-Antoinette in the Temple. The price fetched was €7,500.  The only provenance given is again a previous sale:  "Vente Tajan, Paris, 28th October 2008, Lot 117". Strangely enough, when I tracked down the 2008 catalogue, the picture illustrated was completely different.  Hard to say what is going on here;  however, the 2015 portrait, is very similar to the lost "original" oil which once belonged to the Prince d'Arenberg, now known only from a photograph in the Bibliothèque nationale.
http://gallica.bnf.fr/ark:/12148/btv1b53028264m (left.)


Some other lots depicting members of the Royal Family:


Here are these lots displayed in the château.  It seems a shame to have disturbed these beautiful interiors though, to judge by the website, the intention is now to create a more consistent early 19th-century decor in line with the theatre. 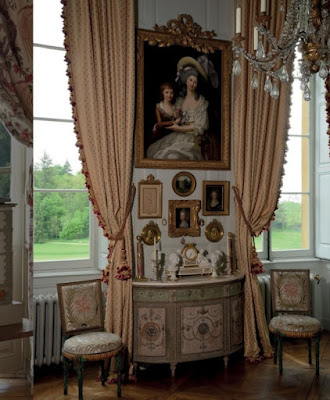 At the moment the château is closed for the promised renovations but will reopen for the 2017 season .