Yes I've finally found another one!  Not perhaps the most interesting, but certainly the most valuable.... 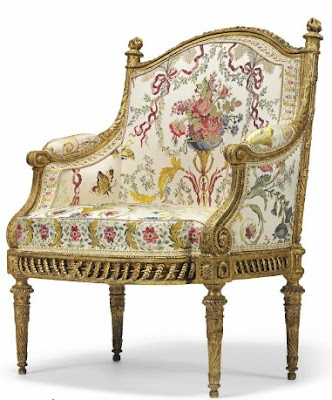 This armchair was sold by Christie's in London in July 2015 for a staggering  £1,762,500 - not surprisingly a world record for a single 18th-century chair.   Christie's specialist Amelia Walker selected it as her object of the year.  The price was chased up by keen bidding: the successful purchaser was almost done out of their prize when their phone cut out; they reconnected to find the price had risen by a million pounds! (The original estimate was a mere £300,000-£500,000....)

The chair is the only known surviving fauteuil en bergère (ie. an armchair with filled-in sides) from a set made by the celebrated cabinetmaker François-Toussaint Folliot for the pavillon du Belvédère.  The suite, which is known to have cost 20,000 livres at the time, was the most expensive ever produced. 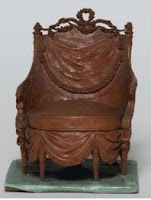 In 1781 Marie-Antoinette ordered  from Pierre Élisabeth de Fontanieu, intendant et contrôleur général du Garde-Meuble,   eight armchairs and eight side chairs “in the very latest taste”  Preparatory work alone took four-and-a-half months and cost 3,200 livres.From among various preliminary models, there survives a wax maquette for one of the fauteuils, made by Gilles-Francois Martin, after designs by Jacques Gondoin, dessinateur des meubles de la Couronne. The elaborately sculpted chairs were the work of the Royal Carpenter François-Toussaint Folliot (also known as François II), with the carving by his uncle Toussaint Folliot.  The chairs were finally delivered to Marie-Antoinette in July 1781 and originally featured the heavy draperies shown in the maquette. The ornate silk cushions were adorned with painted flowers and arabesques designed by Gondoin himself. (The sale notes for the fauteuil specify that “the present upholstery is an attempt to re-create to some degree the beautiful painted silk described in the original order.”)

The suite  was eventually dispersed in the Revolutionary sales.  On September 4, 1793, just five weeks before Marie-Antoinette's execution, all sixteen pieces are recorded as sold  to one “citizen Sellièr” for a mere 2530 livres. The fauteuil  last appeared at auction in Paris at Sotheby’s on June 27, 2001 when it was sold as part of the collection of the well-known antique dealer Luigi Anton Laura. The lot has been on long-term loan to the Louvre.  Christie's have not identified either the 2015 seller or the new owner.

Six of the side chairs are known to survive:, five are in the Getty Museum and a single one in Versailles, donated by Edmond de Rothschild in 1990.

Description of the Lot:

Sale 10670: Taste of the Royal Court: Important French Furniture and Works of Art from a Private Collection, 9 July 2015, London, King Street Lot 18:
A ROYAL LOUIS XVI GILTWOOD FAUTEUIL EN BERGERE
BY FRANCOIS (II) FOLIOT, 1780-81, DESIGNED BY JACQUES GONDOIN, PROBABLY CARVED BY EITHER MME. PIERRE-EDME BABEL OR TOUSSAINT FOLIOT
The arched toprail carved with ribbon-tied flowerhead trails, flanked by flaming ivy-entwined torch uprights, foliate-carved arms with imbricated scroll terminals and on stop-fluted and fluted supports, the seatrails carved with myrtle wound around a reed, below bead-and-reel borders, on spirally-fluted turned tapering legs with flowerhead and bead swag collars, the front legs headed by a patera to the front and a flowerhead within a laurel-wreath to the side, the back legs headed by fluted waisted capitals, on foliate-carved feet, stencilled twice with a 19th-century inventory number 449, the padded back, arm supports and seat covered in floral-embroidered cream silk, possibly originally with two additional legs to the front rail (as seen in the Gondoin wax model), the rail therefore conceivably replaced at the end of the 18th or early 19th century, the feet reattached, originally white-painted and parcel-gilt
36 in. (91.5 cm.) high; 28 ¾ in. (73 cm.) wide; 21 ½ in. (55 cm.) deep
http://www.christies.com/lotfinder/furniture-lighting/a-royal-louis-xvi-giltwood-fauteuil-en-5917470-details.aspx

Chairs in the Getty Collection
http://www.getty.edu/art/collection/objects/5420/jacques-gondoin-francois-toussaint-foliot-probably-carved-by-toussaint-foliot-four-side-chairs-chaises-a-la-reine-french-1780-1781/