The ritual torture of cats was an element of popular festivities throughout the Medieval and Early Modern period, possibly with roots in pagan practice.  One particularly bad time for puss was the Eve of the Feast of St. John.  Here is Robert Darnton (as quoted in Wikipedia): 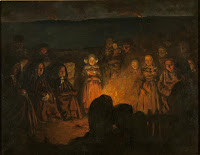 Cats also figured in the cycle of Saint John the Baptist, which took place on June 24, at the time of summer solstice. Crowds made bonfires, jumped over them, danced around them, and threw into them objects with magical power, hoping to avoid disaster and obtain good fortune during the rest of the year.   A favorite object was cats — cats tied up in bags, cats suspended from ropes, or cats burned at the stake. Parisians liked to incinerate cats by the sackful, while the Courimauds (or "cour à miaud" or cat chasers) of Saint Chamond preferred to chase a flaming cat through the streets. In parts of Burgundy and Lorraine they danced around a kind of burning May pole with a cat tied to it. In the Metz region they burned a dozen cats at a time in a basket on top of a bonfire. The ceremony took place with great pomp in Metz itself, until it was abolished in 1765. ... Although the practice varied from place to place, the ingredients were everywhere the same: a "feu de joie" (bonfire), cats, and an aura of hilarious witch-hunting. Wherever the scent of burning felines could be found, a smile was sure to follow.......  Darnton, The Great Cat Massacre (1984) p.87-88.

There can be no doubt that such practices did indeed persist into the Age of Enlightenment, but did 18th-century Parisians really "incinerate cats by the sackful"?

The St.John's Eve celebrations in Paris were part of the formal civic calendar: a well-informed Dictionnaire de jurisprudence published in 1818 has the following details:

The festival  of the "Fire of St. John" was held with great ceremony in Paris up until 1773. the prévôt des marchands and his échevins [ ie. the chief representatives of the municipality,], would process in their ceremonial robes to set fire to a bonfire of logs placed in the middle of the place de Grève, and surmounted by a green tree.  Several of our kings, Henri II in 1549, Charles IX in 157), Henri IV in 1598, Louis XIII in 1615 and 1620, and finally Louis XV in 1719, personally lit the bonfire with a torch presented to them by the Prévôt, and attended the firework display which took place before the bonfire had entirely died down.
Dictionnaire de jurisprudence (1818)
https://books.google.co.uk/books?id=4edx8j7EU24C&pg=PA16


Many accounts mention cat-burning but they all  rely on the same single piece of evidence; according to the Dictionnaire de jurisprudence, a  "singular title which proves that they once used to suspend from the green tree a cage containing various animals, most often cats" .  The  document was published by the magistrate Henri Sauval in his  Histoire et recherches des antiquités de la ville de Paris of 1724. It describes various payments for the St.John's Eve celebrations, among them one made to  "Lucas Pomereux, commissaire des quais de la ville" who had furnished cats for the fire for three years in succession, and on one occasion - for particular royal pleasure - procured a fox; he had even provided a large cloth bag to contain the hapless creatures.   Sauval's publication is also the origin of several other picturesque details:   the height of the tree -  10 toises or 19 metres -  the huge quantities of fagots, brushwood and straw required;  the music and buffet provided for the king at the Hotel de ville (dragées, confitures sèches, cornichons, tartes, massepains etc).

The only problem is that the date of the manuscript is 1573!  Later documentation for cat-burning is conspicuous by its absence......

There is a tendency in modern books and websites, to suppose that the French kings personally prohibited the St John's Eve burning of cats, though there disagreement whether to credit Louis XIV or Louis XV.

The only direct reference I can find refers to Louis XIII.  The royal physician Jean Héroard in his journal for 24 July 1604 reports that the Dauphin, having been taken to the King and Queen, "obtained mercy for the cats that they wanted to put on the bûcher de Saint Jean". The child would have been not quite three years old at the time.

There is general agreement that the last Bourbon king to personally light the feu de la Saint-Jean was the nine-year old Louis XIV in 1648.  The occasion is related in Frazer's Golden Bough:
In 1648 Louis the Fourteenth, crowned with a wreath of roses and carrying a bunch of roses in his hand, kindled the fire, danced at it and partook of the banquet afterwards in the town hall.
http://www.bartleby.com/196/164.html

The event is often given a sinister gloss:
When he was only ten years old, Louis XIV ordered all cats to be burnt alive.  He took a sadistic pleasure in dancing round the flames whilst the little victims cried out in pain.
http://www.communicationfeline.com/site_francais/saviezvous.html

In fact St John's Eve 1648 must have been a tense and trying occasion for the little boy; Paris was on the brink of revolt and a show of royal bravado was required:

On St John's Eve, the King, in a bid to win the love of his subjects, took the place of the duc de Montbazon, the Governor of Paris.    He took his place at the ceremony of the "feu de la Greve" that the Town held that day.  He lit the fire himself and the Queen kept him company during this tiresome ceremony which caused him much suffering from heat and fatigue.  To show confidence in the people, he appeared without Guards or grand entourage.
Mémoires pour servir à l'histoire d'Anne d'Autriche, vol.2 (1723), p.127
https://books.google.co.uk/books?id=9gRkAAAAcAAJ&pg=PA127#v=onepage&q&f=false

Nothing here about cats - but small wonder Louis did not care to repeat the experience.

It is Louis XV who is more commonly credited with abolishing the practice of burning cats; he is quoted as condemning the tradition as a "barbaric and primitive practice"  I have so far drawn a blank for the original source of this statement, though it is plausible enough.

It is not quite true that Louis never attended a feu de la Saint-Jean. The Dictionnaire de jurisprudence omits Louis XIV's appearance in 1648 (perhaps because he did not preside officially)  but lists Louis XV's in 1719: By this date, the firework display had assumed prime importance and is detailed in a printed brochure:
Pierre-Augustin Le Mercier, Explication du feu d'artifice tiré en presence du Roy, la veille de Saint Jean-Baptiste 1719.
http://catalogue.bnf.fr/ark:/12148/cb30809059k

The end of the St. John's Eve celebrations


The 19th-century records do not mention royal intervention; indeed not all of them seem to know know that the civic celebration was formally abolished (in 1773). By the later18th century the festival had become a purely popular celebration; the municipal officials lit the fire, then beat a hasty retreat.  Mercier states that there was never a public festival without disorder and accident  and this was the reason the feu de la saint-Jean was suppressed.


There is one final intriguing document which relates to a St John's Eve celebration in Paris, which this time took place in the Place de la Bastille . The document in question was among the papers from the Bastille published in the collection  La Bastille dévoilée   in 1789.  Although it is not dated, it mentions events in 1730  and  may well represent practices still in place at the outbreak of Revolution. Various formalities are imposed on the état-major   garrison  for St John's Eve.  The soldiers were required to fire ceremonial cannons and to lay a bonfire in the middle of the square.   In the evening they then stood guard whilst the officer formally lit the fire.  According to one 19th-century account, the governor of the Bastille, who was charged with procuring wood,  saw the occasion only as an opportunity to profiteer.  The locale, close to so sinister a prison, was badly chosen for a "feu de joie".

The writers of the Enlightenment

If cats were really still officially burnt alive in 18th-century Paris, one might expect some echo in Enlightenment writers.  The one direct reference is from the Testament of Jean Meslier, who was a priest in Étrépigny, in Champagne and clearly had some experience of traditional practices.  He condemns Cartesianism and other systems which stifle human compassion for our fellow creatures:

Fools, or rather insensitive brutes, make [the cats] cruelly suffer harsh and violent tortures in their entertainments and even in public celebrations; they tie living cats to the end of a pole and light a fire at the base for the pleasure of witnessing the violent movements and the frightened cries that these poor creatures make....
jean Meslier. Testament (1864 ed), p.350
https://archive.org/stream/letestamentdeje05meslgoog#page/n359/mode/2up


Montcrif has only one allusion to St John's Eve, from Fontenelle, who remembered the popular superstitions concerning cats but not, it would seem, the fires.
M de Fontenelle avows that he was raised to believe that on St. John's Eve there remained not a single Cat in the Cities, because on that day they betook themselves to a general Sabbath.  What glory for them, Madame, & what satisfaction for us, to dream that one of M. de Fontenelle's first steps in the pathway of Philosophy might have led him to rid himself of a false prejudice against Cats, and to cherish them!  Moncrif, Les Chats, Letter 1.

Serious French academics have tried in vain to find any corresponding reference. Jean Ehrard even appealed to  Alain Niderst, Fontenelle's biographer, who placed at his disposal his "grand savoir fontenellien" - but still to no avail.  Moncrif is probably repeating something Fontenelle actually said;  still no cat-burning though.
http://www.persee.fr/doc/dhs_0070-6760_2004_num_36_1_2627