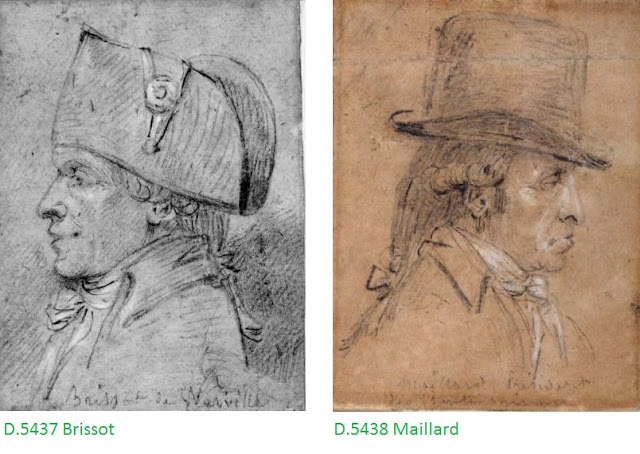 The musée Carnavalet possesses a striking series of small portraits of famous Revolutionaries, the work of the miniaturist and illustrator Georges-François-Marie Gabriel (1775-1865).  There are thirteen in total, each measuring about 10 cm by 7 cm.
As a historical figure, Gabriel is little more than a name. Nothing is known about his life beyond the information that he was born in Paris in 1775 and was a pupil of Naigeon and Jean-Baptiste Regnault. The contributor to the  French  Wikipedia  has managed to find a death certificate, which shows that he died in Paris on 1st January 1865, at the age of ninety and that he was single.  He had a varied and prolific career as a miniaturist, watercolorist, designer and lithographer.  Today he is remembered chiefly for his drawings of the inmates of the Salpêtrière asylum, which establish him  as a precursor of Géricault and a gifted "portraitist of physionomy".  Among his subjects was Victor Hugo's  brother, and Theroigne de Méricourt, who, in 1816 had already been confined for 22 years.  In an article of 1961 the art historian Jean Adhémar,  describes Gabriel as a fervent admirer of Lavater, who seized the opportunity to sketch his contemporaries in situations of anxiety, sadness, madness.
Sadly nothing can be discovered about Gabriel's Revolutionary activity to illuminate the circumstances in which the portraits were made. There is no real reason to doubt that they are sketches from life, though  some are more convincing than others. (Among the finest is that of the septembriste Maillard, with his exaggerated hooked nose.) The less finished examples give an idea of just how quickly Gabriel could create his outline figure. Some verge on caricature; some certainly tip over:  the slightly unconvincing overlarge eyes seem particularly  characteristic of Gabriel's style.  Another series of drawings in the Carnavalet, of Revolutionary "clubbists", suggest he had a repertoire of stock revolutionary accessories readily to hand. The portraits are mostly profiles as though for medallion engravings - only the image of Louis XVII's gaoler Simon is face-on, a pose which was characteristic of Gabriel's asylum drawings.
Gabriel's Revolutionaries also exist in the Bibliothèque Nationale as a set of 17 engravings, 10 of which represent deputies of the Constituent and the Convention [not on Gallica].  Like the drawings of Vivant-Denon they were later given wider currency though engravings produced for the print seller Vignère in the 1840s, several of which are in the Carnavalet's collections.
Notices: Musée Carnvalet, D.5434-D.5447.
https://www.parismuseescollections.paris.fr/fr/recherche/type/oeuvre/auteur/Gabriel%2C%20Georges%20Fran%C3%A7ois%20Marie 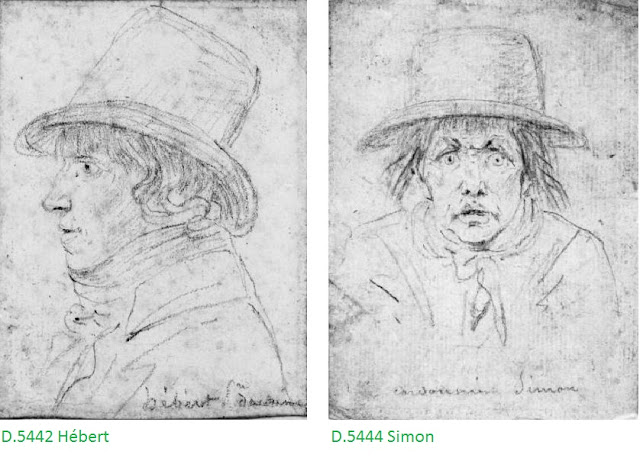 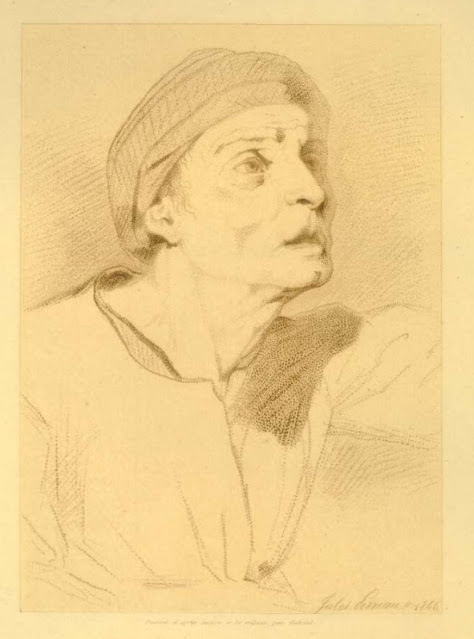