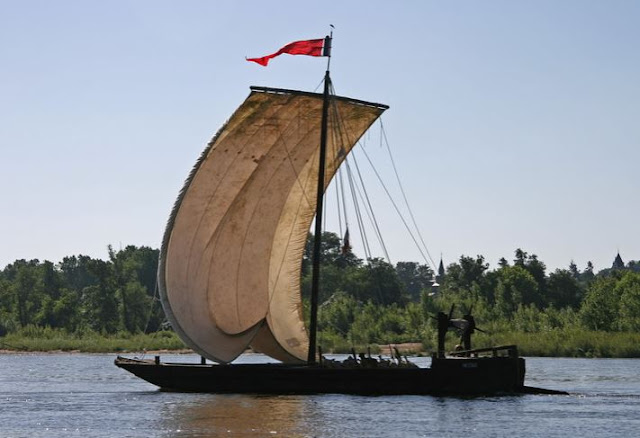 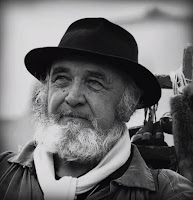 These evocative pictures of old river barges are from the "Remontée du sel",  a event which took place along the River Loire for a number of years between 1997 and 2009.  The original initiative was that of the late Jacques Gilabert, a well-known local performer, writer and champion of regional heritage.
All sorts of traditional river vessels - "toues, futreaux et gabarres" -  made their way along the old salt route between Nantes and the Touraine, in a bid to recreate something of a long-lost way of life on the water.  In 2007 there were twenty stopping-off points, and the event attracted 26,000 visitors. (Sadly, in 2009, the "Mission Val de Loire" withdrew its backing.)
Alain Vildart, "Gabelous et faux-sauniers la guerre prend l'eau!" La Nouvelle République.fr. article of 24.08.2017
https://www.lanouvellerepublique.fr/blois/gabelous-et-faux-sauniers-la-guerre-prend-l-eau

Throughout the 17th, 18th and early 19th centuries the Loire was a major artery of the domestic salt trade. In 1788 over 13,000 tonnes of salt from the Breton salt marshes were carried by coastal vessels (caboteurs) to Nantes and deposited in warehouses known as "salorges".  Here the river boatmen loaded their vessels in order to supply the greniers à sel along the Loire and its tributaries, the Vienne, the Cher, the Sarthe and the Mayenne. The entry point to the region of the grandes gabelles was the customs bureau at Ingrandes, which systematically controlled all river traffic.

Salt could also be transported via the Loire to Paris;  thanks to the prevailing Westerly wind, the gabarres could be sailed all the way to Orléans, which was an important staging post for the provisioning of the capital.  Cargoes destined for the capital were  transported via the canal d'Orléans (1692) and the canal de Briare (1642) which linked the Loire to the Loing, a tributary of the Seine.  To the south goods from the Midi were also taken up the Rhône, then from Lyon by road to join the Loire at Roanne.  During the wars with England, more traffic used the Loire in order to avoid the English Channel.  Salt would be transported to Paris along the Loire and the canal d'Orléans rather up the Seine from Dieppedalle.  This trade reached a peak during the Revolutionary and Napoleonic era. (see  Brouard)

The remontée itself was a daunting undertaking.  The progress of the long trains of  heavily laden barges was incredibly slow.  From Nantes, it took a month to reach Chinon and four or five months to reach Digoin. The going could be slower still if there was bad weather or reduced water levels.  From Orléans onwards,  the difficulties were compounded as water levels lowered, and winds died down or were even contrary. The barges now invariably had to be towed.

The marchands voituriers, recruited by the Farm, were obliged to adhere to strict conditions and submit to frequent checks. They  were required to own a number of vessels - six, eight, occasionally ten; the boats had to be built of solid oak, well equipped, with "soutrages" - planks to separate the salt from the bottom of the vessel.
The sacks of salt, which weighed 98 kilograms each, could only be carried by two men.  On board they would be placed in piles of 30 or 50, covered with matting.  A single boat would hold 200 to 250 sacks.  The cargo would be kept under surveillance night and day for theft. The Farm would put its own guards on board to watch the crew.  On arrival at the grenier, any lost or spoiled salt would be deducted from the price of the consignment.  The regulations punished by death any voiturier who had broken the seal on a sack of salt, though fraud still occasionally happened.  A common subtrefuge to cover theft or loss was to fake a shipwreck.
Despite all the difficulties and restrictions, contracts with the Farm, often renewed year on year, were much coveted as the profits were excellent.