Organisation of the gabelle
Salt taxes - the hated gabelle - were a crucial component of royal revenue, involving a whole series of diffierent levies, some on consumption, some on sales, some on circulation.  Their administration involved the General Farm in maintaining a vast organisation aimed at imposing a monopoly of sales and imposing control over the salt trade at every level. 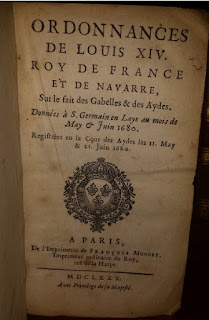 The fundamental organisation of the gabelle was laid down by a series of Ordonnances in 1680.  For the purposes of the salt-tax France was partitioned into six different regions.  The lion's share of revenue was contributed by the  pays des grandes gabelles, which embraced Northern and Central France, including Paris, Orléans and the traffic along the Seine and Loire.   Here the consumer was compelled to buy salt from stores controlled by the Farm, and duty could increase price of salt tenfold. The petites gabelles in the South-East was also subject to duties, though here consumption was less tightly regulated.   The pays rédimés des gabelles in the West and south West was historically free from  salt-tax, although subject to some tariffs. The remaining regions were the salt producting areas: the  pays de salines (Lorraine, Alsace,Trois-Évêchés and Franche-Comte) and the pays de quart bouillon (Normandy, where salt was produced by evaporation from sea water).  Finally there were the  pays francs, the most important of which was Brittany.
This division made for extreme and arbitrary differences in  prices: salt which sold for two or three livres-per-minot in Brittany might for fifty-six or more livres-per-minot across the border in the grandes gabelles.

The basic unit of administration for the gabelle was the provincial direction. Within this framework the Farm maintained a network of  greniers à sel which we both warehouses and the local offices of the General Farm. The were also the seat of a royal fiscal tribunal, the jurisdiction des gabelles, which tried cases of tax evasion and smuggling.  There were a total of 244 greniers in the region of the grandes gabelles in 1763.

Supply and transportation of salt

Salt for the pays des grandes gabelles came exclusively from the salt marshes around Nantes. The  saltworks themselves were privately owned, though the Farm controlled  distribution.  Until 1760 the salt was sold through intermediaries;  in the latter part of the century the Farm bought directly. The consignments would be shipped to coastal depots ("salorges") at the mouths of major rivers, and thence transported by barge and wagon to the greniers à sel.

The Ordonnances of 1680 listed a total of six designated Atlantic ports  Nantes, Caen, Le Havre, Honfleur, Dieppedalle,  and Saint-Valléry-sur Somme. These were at the mouths of the principal rivers (the Orne, the Seine, the Loire and the Somme).

The quantities of salt shipped were considerable. In 1788 alone the depot at Dieppedalle near Rouen, which served the basin of the Seine, received nearly 21,000 tonnes.  This represented 178 coastal voyages between Honfleur and Dieppedalle, each of which took between five and ten days to complete.  Lighters (allèges) would then sail upriver from Rouen to Paris, each with a cargo of four to five thousand sacks of salt.  The journey took between 15 and 18 days, slowed down by the many tolls en route.  In Paris the cargo might be be transferred to wagon trains, six to eight "marnois", pulled by 36 to 40 horses, to be taken on to the Marne or the l'Yvonne. 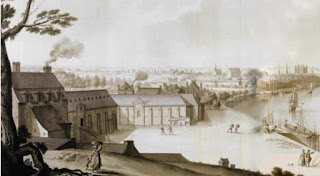 Outside the grandes gabelles  similar networks of river routes operated:  In the pays rédimé of the South West,  salt was carried inland from Brouage and the  îles charentaises via the Garonne and Dordogne.  From the Mediterranean coast, salt was distributed throughout Eastern France via the canal du midi, the Rhône and the Saône.

Transportation was not undertaken directly by the Farm but contracted out to private individuals. Indeed, at the end of the 18th century, the voiturage for the whole of the grandes gabelles, was controlled by a single entrepreneur, Antoine Gabriel Pelabout, who in 1793 received compensation  from the Revolutionary Government for the loss of his business..

Each phase was carefully regulated:

The salt was normally carried in sacks, though on the Rhône, and sometimes on the Seine, it was transported "en garenne" that is to say in barrels. In Nantes there was a dedicated sack manufactory.  Each sack "aux armes de France" weighed about 100 kilos and could only be carried by two men.  It would be would be carefully checked and sealed before being handed over to the voitures des sels. The sacks were always vulnerable to tampering.  According to Vauban, writing in the 1690s,  employees of the Farm often themselves engaged in fraud - "either by false measures, with a hopper rigged for the purpose, or buy mixing sand and other substances with the salt."

The loading, conveyance and unloading were minutely inspected at each stage by the commis des Fermes  and subject to draconian regulations.   An instruction of 1765 specified that convoys travelling by land should consist of at least ten to twelve wagons, escorted by armed guards and should operate only by daylight. On arrival at the grenier, the sacks had to be unpacked and accounted for and all traces of leftover salt washed away.   The official lead seals of the Farm, many of which survive today, gave careful details of destination and provenance (See  Jézéquel, 2019)

The salt had to remain in storage for at least two years in order to gain condition ("se gabeller").  Thus each grenier was supposed to have reserve stock of at least two years consumption. The salt would be accumulated in two great piles, or occasionally, as was the case in the Paris grenier, with its separate warehouses, in three. A new "masse de sel" was never broached until the previous one was completely depleted.  The wholesalers or marchands-greniers would collect their salt in long  chests, often with separate compartments for the different grades .

The bureau des gabelles was presided over by a high-ranking agent called a receiver, who was responsible for all aspects of supply, sale and storage. The grenier itself was the chief retail outlet,  though there was also a system of sales licences, called "regrats" , which enabled wholesalers to supply petty tradesmen,  usually retailers of fruit, meat and cooked fish, or salt and spices.  Shopkeepers were required to keep a permanent stock of salt, which had to be displayed in a sack near the door in plain view of  customers.

Salt taxes and the consumer

In the pays des grandes gabelles, the salt-tax was not merely an indirect duty.  The consumer was compelled to purchase a minimum quantity of salt annually; this sel d'impôt was assessed as a direct tax in much the same manner as the taille.  Each parish was allotted a quota, which was then divided between individual taxpayers.  The quantities imposed stayed more or less steady throughout the century; however, the monopoly price of salt increased markedly after 1760. Registre sexté | Dictionnaire de la Ferme générale (1640-1794) (hypotheses.org)

Salt as part of sel d'impôt was restricted to cooking and the table.  For animal feed and industrial processes, additional sel de vente volontaire, which was slightly discounted, was sold at the greniers.  In the petites gabelles the monopoly of the Farm prevailed, but control was not so absolute, and  no sel d'impôt was imposed.

From the first, the iniquities of the system were evident to all.  Vauban, writing in the 1690s, graphically charted the miseries of the petty consumer:

The high price of salt makes it so scarce in certain parts of the kingdom, that it causes a sort of famine. The people cannot season their meat, through lack of salt. They no longer eat pork because they cannot salt it;  they have little or no salt even for their stewpots....  In the pays d'impot the situation is worse.  Individuals are forced to buy more salt than they need, and are not allowed to keep salt from year to year.
La dîme royale / Vauban | Gallica (bnf.fr)

Policing of the Gabelle

To enforce its monopoly, the Farm employed an armed and uniformed "milice financière" of considerable size.  In 1768 E. M. Delahante estimated the total at 19,500 men. Lavoisier in 1774 reckoned 21,200.   The primary unit was the brigade, two to eight men, under the command of a brigadier. The brigades formed divisions of 24-200 men under a captain-general; in 1774 there were 352 divisions.  Brigades could be stationed at warehouses and customs houses, or act as roving forces, operating from villages along the customs frontiers.  The majority patrolled on foot, but some were mounted and a few crewed coastal or river-patrol craft.  They were particularly concentrated along the boundaries of the grandes gabelles, where salt smugglers were most active.

The direct pursuit of smugglers, however, was only one aspect of a massive routine operation of surveillance against fraud.  It fell to the guards to supervise the assessment and sale of  sel d'impôt, police the transport of salt, check on carriers, vendors and consumers at every point.  They enjoyed extensive powers of search - whether of of persons, vehicles or premises. These were increased still further in 1722 when a new set of Letters Patent gave captains-general virtually unlimited rights  of entry.  The procés-verbaux, drawn up by the gabelous  acted as arrest warrants. They were empowered to use force and could call on the assistance of the courts, and, where necessary, the services of the maréchaussées and army to run down salt smugglers.

The war against fraud and smuggling was backed up by a formidable judicial machine.  Petty salt smugglers would be summarily tried by the court of the jurisdiction de gabelles with more serious cases  referred to the higher courts. As the century progressed, there was increasing recourse to   extraordinary tribunals.  The first "commission spéciale" was created in Valence in 1733 to combat armed bands in eastern France  - it was before this court that Mandrin appeared  in 1755. Further commissions were set up in Reims in 1740,  Saumur 1742 and,  later in the century, in Paris (1772) and Caen (1785).

Penalties were ferocious.  The basic penalties were laid down in 1680 but were much revised in the course of the century, always in the direction of greater severity. Fines for purchase or use of illegal salt graduated from 200 to 1,000 livres.  Punishment for smuggling ranged from whipping and branding to exile and the galleys.  Use of arms or any physical resistance to the guards, was classed as rebellion against sovereign authority and punishable by death on the wheel.  In practice, particularly in the last two decades of the Ancien régime, the full rigour of the law was rarely applied;  death sentences  were usually commuted to life imprisonment in the galleys;  branding and public whipping fell into disuse.  The Company rarely pressed charges against petty salt smugglers, since the cost of collecting the fines outweighed the benefits.  However,  Mollien noted that as late as 1783 over two hundred men were condemned to the galleys for salt smuggling.  Out of six thousand convicts in the hulks, over a third were condemned smugglers. "If the fisc humanised itself, it was merely as executioners who know when to stop the torture at just the point to spare the life" (Mollien, Mémoires vol. 1,  (1898) p.82)