Smugglers and their dogs

One particularly inventive ruse of 18th-century smugglers was the use of specially trained dogs to carry contraband salt and tobacco.  On 6th June 1734,  Royal Letters patent  prohibited the inhabitants of the  pays des grandes gabelles on the frontier with Brittany from keeping mastiffs ("chiens mâtins" ), on pain of a penalty of 500 livres.  According to the preamble, these dogs were bred in great numbers.  They would be leashed together like  packs of hounds and taken into Brittany, where collaborators would keep them shut up in barns or stables for a few days until they became hungry.  Twelve to fifteen livres of salt would then be attached to the dogs' necks, wrapped up and rolled into collars of waxed cloth.  When the dogs were released at night they invariably made their way back to their masters by the route they had come.  The routes would be varied so that they were difficult to trace.  Sometimes the dog's food  would be deliberately  impregnated with salt so that the animal became maddened with thirst.
Lettres patentes portant défenses aux habitans des provinces limitrophes de Bretagne d'avoir chez eux des chiens-mâtins, à peine de 500 livres d'amende... Registrées en Parlement [à Rennes] le 12 juillet 1734
https://gallica.bnf.fr/ark:/12148/bpt6k96075628/f348.item 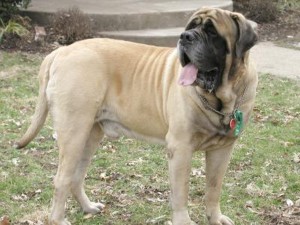 The dog referred to as a "chien mâtin" was the Belgian mastiff, a breed which is now defunct but was once widely employed as a working dog, particularly to pull carts. Such dogs were large and powerful beasts.
The smugglers' dogs were much vaunted for their intelligence and their ability to evade the guardsmen.  In Laval the tale was told of Marjolet, a dog belonging to a weaver in the rue Saint-Jean, who would regularly pick up salt in La Gravelle across the Breton border.  On one of his return trips the dog was pursued by three gabelous.  Rather than betray his master, Marjolet diverted into the rue Sainte-Catherine, where he managed to hide under a woman's skirts.  She  was more than happy to send the guards off in the wrong direction,so as to allow the dog to return  to its master at leisure. (Briais, Contrabandiers de sel, p.73)

As the century progressed, the fight against the canine smugglers continued to escalate. On 8th April 1763 the Farm offered a reward to employees who killed dogs carrying salt or tobacco.  Each animal was worth 30 sols,  plus the value of the merchandise recovered. The dog's paw was to be presented as evidence of its destruction.
When the Breton peasants complained, the Farm admitted that "although 2,500 dogs were killed each year, the contrabandiers still found ways to acquire more" .  In 1781, according to the director Châteaubrun, , 4, 449 dogs were killed in jurisdiction of the grenier at Laval alone (See Briais, p.74).
The use of dogs was mainly associated with the Breton Border, but it was not entirely confined to the West. A particularly vivid report  survives from the direction  of St. Quentin in Picardy in the mid-century.  In the  parishes of Montbrehain, Etaves, Grandfresnoy and Seboncourt in the Aisne, longstanding centres of smuggling, the Farm's officials had been surprised to discover over a hundred dogs, each capable of carrying between 30 and 50 livres of salt. In response to the "disorder" the Farm had acquired dogs of its own to hunt down the smugglers;  six employees had been sent from Amiens each with a trained dog and with a remit to train more.   In 1786  an official of the Farm in St. Quentin confirmed to his colleague in Valenciennes, that 600-700 dogs were killed there each year.
See:
"Chiens de douaniers, chiens de contrebandiers", Association pour l’Histoire de l’Administration des Douanes, post of 01.01.2021. Documents from the Municipal Archives of Valenciennes
https://histoire-de-la-douane.org/chiens-de-douaniers-chiens-de-contrebandiers/
It would seem that the measures were of little avail.  On 7th May 1782 another set of  Letters-Patent was issued for the Breton frontier. 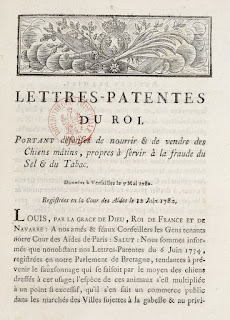 This time the preamble reads:

"We are informed that notwithstanding our Letters-Patent registered by our Parlement of Brittany, intended to prevent salt smuggling using dogs trained for the purpose; these animals have multiplied to a point so excessive, that they are traded publicly in the markets of Towns subject to the gabelle and  tabac; We have therefore deemed it necessary to renew and extend the provisions of the aforesaid Letters-Patent...."

A fine of 200 livres was imposed for keeping or selling chiens- mâtins in the provinces subject to the gabelle, or anywhere within four leagues of the border, with the sole exception of farm guard dogs. The agents of the Farm were given  the right to search and prosecute market traders and to shoot any dog they found loose.
Lettres patentes portant défenses aux habitans des provinces limitrophes de Bretagne d'avoir chez eux des chiens-mâtins, à peine de 500 livres d'amende... Registrées en Parlement [à Rennes] le 12 juillet 1734
https://gallica.bnf.fr/ark:/12148/bpt6k96075628/f348.item

The consensus, especially among later commentators, was that the dogs of the Farm were far more vicious than those of the smugglers.  In a letter of 1665   Colbert's brother wrote to the minister from Vitré denouncing the violence of the archers of the gabelle: "I am obliged to inform you that they have dogs trained to track smugglers;  to accustom the dogs, they have them tear at the legs of these wretches, so that they develop gangrene in prison from the bites."
Correspondance administrative sous le règne de Louis XIV,  vol. 1, p.490-1.
https://gallica.bnf.fr/ark:/12148/bpt6k204027t/f535
As noted the Farm at St Quentin acquired several tracker dogs.  In May 1762 brigades in Maine  spotted some porte-cols hiding sacks of salt in the landes de Châtenay  close to the Breton border and, with the aid of their dogs, tracked them to a cabaret in Juvigné (Briais, Contrabandiers de sel, p. 129)  [I am sure there must be more records from the 18th century - I will any more that I come across.]