The monument to Bonchamps at Saint-Florent

My father was one of the five thousand prisonners in the church at Saint-Florent, for whom Bonchamps commanded pardon on the point of dying.  In executing this monument I wanted to repay, as far as I could, my father's debt of gratitude.
Note of David d'Angers on an engraving (quoted Jouin, David d'Angers, p.150-151) 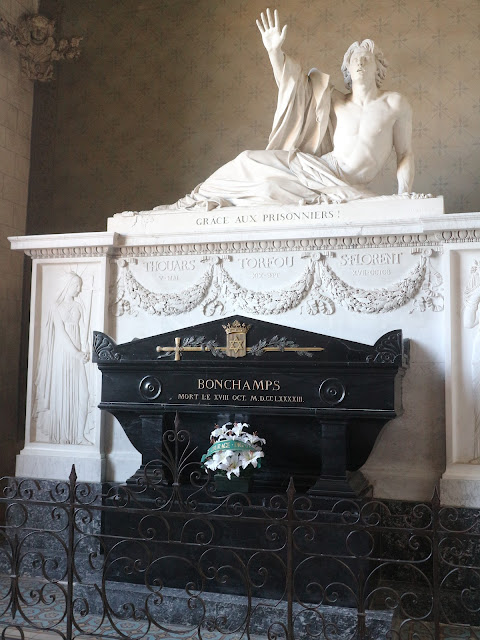 Here are a few additional notes on David d'Angers's famous monument to Bonchamps in the Abbey church at Saint-Florent. 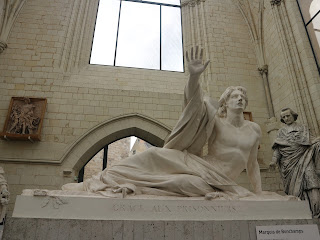 The Father
David d'Angers always maintained that he executed the monument in recognition of Bonchamps's humanity, as personally experienced by his father.  Pierre-Louis David (1756-1821) had been a successful decorative sculptor in Angers. He was an enthusiastic patriot and volunteered in the Republican army in 1793.  In a notice written in 1838, David recalled that his father was a daring soldier, who was often entrusted with dangerous missions.  Having been wounded and captured at the Battle of Torfou (19th September 1793), he found himself among the prisoners liberated at Saint-Florent on the orders of Bonchamps. He subsequently retired from active service to a post in army administration, but remained a lifelong ardent supporter of the Revolution, an allegiance which he handed on to his son.
It comes as some surprise to learn that David's father had taken the five-year old Pierre-Jean, the youngest of his four children, on campaign with him.  After the Battle of Saumur, the boy became separated from his father, and actually travelled for some time in the baggage of the Royalist army. He  was reunited with his father by chance at Saint-Florent.

The sculpture
On 20th July 1817 Louis XVIII gave permission for the erection of a monument to Bonchamps financed by public subscription.  In line with the Restoration policy of national reconciliation, the King laid down certain conditions;  the monument was to be set up inside church rather than on the public square, and was to be engraved with Bonchamps dying words, "Grâce aux prisonniers!"
In preparation, on 18th October 1817, the anniversary of his death,  Bonchamps remains were exhumed from the cemetery at Varades and taken with great ceremony across the Loire to a temporary resting place in the family church at La-Chapelle-Saint-Florent.  It was to be another eight years before they were finally brought to Saint-Florent.
In August 1818 David obtained the commission for the statue from  Bonchamps's son-in-law,  the comte de Bouillé,   A committee, headed by the duc de Brissac, oversaw the work. The subscription, to which the Court contributed, raised 29,000 francs, of which the government supplied half.  As David later wrote to his friend, the writer Louis Pavie, he did not profit from the work; indeed, he scarcely covered his costs [Jouin, David d'Angers, p.152-3].
David submitted various projects, of which several preliminary sketches remain.
See: "Les dessins préparatoires au monument du général Bonchamps" (Resource for 2017 Exhibition at Cholet]  https://www.oliprat.com/mba/veronique/
Some versions featured an elaborate military "triumph" rather than an effigy.  The committee finally approved the classsical semi-recumbent (and semi-nude) figure of the general that we see today.  A proposed bas-relief was replaced by two allegorical figures of Religion and France.  The design was agreed in June 1819, but the work was not finally completed until 1824.  In preparation, David made a bust of Bonchamps's daughter, whom everyone agreed bore a striking likeness to her father.  Those knew him, later recognised his features in those of the statue.

The bas-relief which featured in David's initial projects, shows the scene of the pardon.  A column in the centre of the composition, represents the door of the church of Saint-Florent.  To the right the doomed Republican prisoners say their last farewells:  an old soldier, sits with his head in his hands, whilst the young man at his knees shields his eyes.  On the left, outside the door, the Vendean army is eager for vengeance.  A cannon is already trained on the door.  In the foreground Bonchamps, supported by the chevalier d'Andigné, raises his hand to command clemency.
The architect associated with the project, David's friend Achille Leclerc, supervised the construction of the tomb and its placement in the Abbey church.  He planned extensive work to improve the elevation  and lighting, though it is not known to what extent this was carried out.  The statue was originally situated at the back of the sanctuary, where the main altar now stands, whilst the altar itself occupied a typically 18th-century position in middle of the choir. The monument was transferred to its present location in the north transept in 1890; there is a photo in the church which shows it just before it was moved. The tomb was extensively renovated in the 1960s: See: Recherche - POP (culture.gouv.fr)
At Saint-Florent in 1825
The formal inauguration of the monument took place on 11th July 1825.
In preparation, on the morning of 18th June 1825, Bonchamps's remains were transported to Saint-Florent-le-Vieil and formally sealed inside the base of the monument to await the arrival of the marble statue.
Despite his Republican sympathies, David himself was an honoured guest at the event.  He first made the journey from Paris to Angers where he was given a warm welcome; on his arrival and departure he was offered a serenade, which moved him greatly.   He stayed several days and was reunited with old friends.  With his former drawing master Jean-Jacques Delusse, he  made a sentimental pilgrimage to the tomb of his father (See Jouin, p. 153) 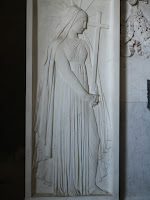 The completed statue left  Port Ayrault  in Angers on 25th July, and was transported by sailing boat along the Maine and Loire to Saint-Florent under the care of David's assistant Le Goupil.  David himself, Louis Pavie and their party followed in order to supervise the unloading and installation.
The weather was fine and peaceful. In his later account, Louis Pavie describes how the belltower of the Abbey church came into view. On the opposite bank the friends were moved to catch a glimpse of the village of La Meilleraie where Bonchamps had died.  The party was welcomed by the comte de Bouillé and several of the general's close friends, and stayed with them as their guests.  David made excursions to the cottage in La Meilleraie, where he arranged to have a plaque erected, and to Bonchamps's château at La Baronnière.
It must have been during this time too that David met with manyveterans and sketched their portraits.
The ceremony which took place on 11th was a carefully orchestrated and heavily emotional affair.  The walls of the church were draped in black cloth and a tribune was erected. The abbé Joseph Gourdon, the curé of La Chapelle-du-Genet, and himself the son of a veteran, pronounced the funeral oration.  Besides the family, various dignitories attended  - the prefect of Maine et Loire, the Bishop of Angers, high ranking members of the local nobility.  But the occasion was dominated by the aging survivors of the Army of the Vendée, who stood "ranged in order of battle", with their sons lined up on the steps of the monument.

Postscript: David d'Anger in 1851 and 1855
In 2019 Jean-Clément Martin published article by David on the war in the Vendée, which appeared twenty-five years after the inauguration, in the Almanach du peuple for 1851.  The piece serves as a corrective to the idea that  the monument was intended by the sculptor as a symbol of national reconciliation.  David himself had always made it clear that, whilst he admired Bonchamps and felt attached to the Vendée, his debt of gratitude was a purely personal one.  In the intervening years, as the political situation in France polarised, David continued to be true to his Revolutionary convictions: in 1848 he had been elected as a deputy for Maine-et-Loire to the Constituent Assembly, where he sat with the Republicans of the "Mountain",  then in 1851 he was forced into exile for his opposition to Napoleon III.  In his essay he follows the conclusions of writers like Michelet and Jaurès who insisted  on the violence of the Vendean rebels, the treachery of the local nobility and the duplicity of the Counter-Revolutionary priests.  According to David, "the finest pages of this sombre history belong to the Republicans"  - whereas the Vendeans fought behind hedges, in their own country, the Revolutionaries had only their "indomitable courage" to fall back on.
Jean-Clément Martin [blog], "David et la Vendée. De la difficulté des réconciliations nationales", post of 10.07.2019.  (mediapart.fr)
In 1855, the year before he died, David made the journey along the Loire to see his statue for the last time.  It was a deeply sentimental moment of reflection.  Standing before the effigy of Bonchamps in the church at Saint-Florent, he pronounced himself content with the work: "After attempting to pay my debt, I wished to say my farewells before I died." [Journal de Maine-et-Loire, 9th January 1856)
References
Henry Jouin, David d'Angers: sa vie, son oeuvre, ses écrits et ses contemporains · Vol.1 (1878)
[On Google Books]
_______, ed. David d'Angers et ses relations littéraires:  correspondence  (1890) [On Google Books]