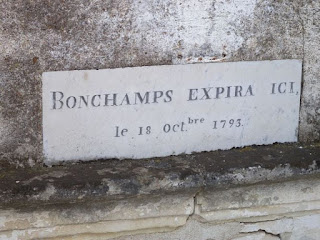 A favourable symptom affording some hope, my husband availed himself of it to quit Saint-Florent. He caused himself to be carried to the village of La Meilleraie, where, in a fisherman's cottage, feeling his end approaching, he occupied himself with the duties of religion alone.  In his last moments he had the happiness to be assisted by two venerable ecclesiastics, MM, Courgeon and Martin - he listened to their exhortations not only with courage but with rapture.  They promised him those heavenly rewards which are laid up for those who have earned them by the purity of their lives, the fulfilment of their duties, and their fidelity to their obligations.   After this discourse, M. de Bonchamps, lifting his eyes and his hands towards heaven, said, with a voice yet firm, "Yes, I dare rely on the supreme mercy.  I have not acted from a sentiment of pride, nor from a wish to gather a reputation which perishes in eternity.  I have not fought for human glory......" All the persons who listened to M. de Bonchamps melted into tears.  His faith, his affecting fervour, diffused into every heart the sentiments with which he was penetrated.  M. de Bonchamps repeated several times that the pardon of the prisoners had been promised him, and that he depended upon it.  After having received with an angelic piety the succours of religion, he expired in the arms of MM Courgeon and Martin.
Memoirs of the Marchioness de Bonchamps, ed. the comtesse de Genlis (1823; English translation) p.77-82. [On Google Books]

From the Memoirs of Mme de La Rochejaquelein:

They had brought to St Florent five thousand Republican prisoners.  M. Cesbron d'Argogne, an old chevalier of St. Louis and commandant of Cholet, had conducted them.  He was a severe man, and had nine of them shot on the road for trying to escape.  However, they could not be dragged further, nor taken across the river.  The officers deliberated on the fate of these prisoners.  I was present; M. de Lescure lay on a mattress and I attended him:  everyone agreed, at first, that the prisoners should be shot on the spot.  M. de Lescure said to me in a feeble voice that was not heard, "What a horror!"  But when it came to giving the order and killing these unfortunate men, no one wanted to take responsibility, not even M. de Marigny.   Some said that such awful butchery was beyond their strength, others that they did not want to become executioners.  Others added that these poor men, who had been prisoners for four months, were not responsible for the crimes of the Republicans;  such a massacre would only redouble the rage of the patriots who henceforth would not spare the lives of anyone left living in the Vendée...Finally it was decided to give them their freedom.   M. de Lescure took no part in these deliberations.  Only I heard him murmur, "Ah, now I can breathe easy!".
Mémoires de Madame la marquise de La Rochejaquelein (6th ed, 1848) p.297-298 [On Google Books]
There are slight variations between the different editions of Mme de La Rochejaquelein's text.  The reference to Lescure's protest seems to have been a later addition, perhaps introduced by her editor Prosper de Brabante, who wanted to make explicit the collective rejection of violence by the Royalist leadership.  However in a footnote to this edition Mme de La Rochjaquelein refers to Chauveau's biography of 1817, and says, straightforwardly, that she had been unaware of Bonchamps' intervention due to the disorder of the moment.