... An unpleasant relic from the War in the Vendée 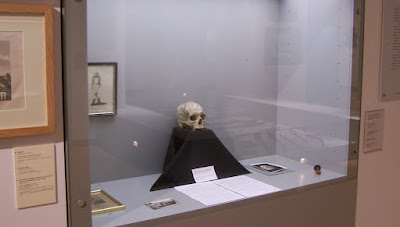 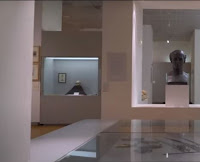 When I came across this macabre image by chance, I was rather shocked to learn that the skull on display is that of the much-respected Vendean general Jean-Nicolas Stofflet. This some downmarket Ripley's; it is the flagship Musée d’Art et d’Histoire in Cholet.   With all the dialogue around history and memory in the Vendée, it seems strange to find so disrespectful an exhibit.  (I suspect part of the explanation is that the skull is on loan to the museum - the family who owns it are said to take an active interest in its display and study.)

Unsurprisingly, there have been protests. In 2015, during a visit by the organisation Souvenir Vendéen  to  Barthélémont, in Lorraine, the birthplace of Stofflet, the mayor Serge Husson, who is  himself a distant descendant of the general, declared his desire to see an end to this "indecent situation".  He wanted to see the skull buried or deposited,  either in Barthélémont  itself or in the memorial chapel near Maulévrier.

In October 2021 Souvenir Vendéen launched the project "Stofflet révélé!".  The aim was to create a virtual facial reconstruction based on the skull. As well as revealing the visage of the general,  the initiative was intended to pave the way for the removal of the relic from public display.  Donations were invited via Dartagnans, a firm which specialises in cultural fundraising.  The initial appeal, for 5,000 €, covered the reconstruction itself, which was entrusted to Philippe Froesch's VisualForensic.  A further 10,000€ would allow the production of an educational video.  The third phase would involve the creation of  three 3D replicas of the skull for display, so as to free up the original for burial. However,  the 15,000€  required for this final stage were said to be beyond the scope of the association's fundraising efforts.

The initial plan was to have the reconstruction ready for display in mid January 2022. The fundraising went well.  On 26th October 2021 initial photogrammetry was undertaken by archaeologists from the Association Insertion Patrimoine based at the European Centre for Prehistoric Research (CERP) in Tautavel, who more usually model prehistoric remains.  234 different views were taken.  This sophisticated technique meant that handling was kept to a minimum.
On 9th January 2022 the Courier de l'Ouest published a report with a photograph of the work in progress.  Philippe Froesch confirmed that he would be finished  by "the end of February at the latest".  Since then, however,  the project seems to have stalled.  The Visualforensic website now says the Stofflet is to  "on display in 2023".  I am not sure what the problem is, but for the moment, we just have to be patient. 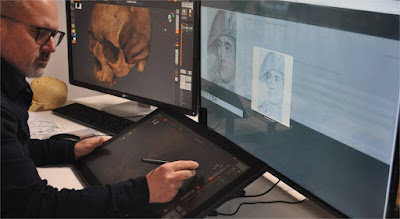 How did the museum come by the skull?
Stofflet was executed by firing squad  together with four of his companions in arms, in the Place des Armes in Angers, on 25th February 1796.   After the execution the bodies were transported to the cemetery at Le Clon, where Stofflet's head and right hand were cut off for public display.  This was not an official initiative but a piece of private enterprise by a certain "citizen Gaultier"  - though the fact his action was tolerated does little credit to  the Revolutionary authorities.
The historian Dominique Lambert de La Douasnerie supplies the available details:
The decapitation and amputation are not in any doubt.  On 12th March 1796, seventeen days after the execution, a official in Angers called Naurays, wrote to the commissioner of the Directory:
"Our colleague Le Peudry has informed me of your concern regarding the conduct of citizen Gauthier, who has been exhibiting the head of the brigand Stofflet to public view.  This citizen imagines that, by exciting public curiosity, he will earn some means of subsistence.  He has presented himself to several of my colleagues who, like myself, have no problem allowing him to proceed...I cannot hide my opinion that this publicity is of benefit to assure the public of the brigand's destruction.  If you think otherwise, please let me know and we will concert to take appropriate action."
The patriotic exploitation of the remains of Stofflet went ahead, although some municipalities resisted. According to a letter of 25th March, the authorities in Saumur prohibited exhibition of "the head and right hand" of Stofflet, and, shortly afterwards, suppressed a theatrical production entitled "The Death of Stofflet".
Dominique Lambert, Paroisse et soldats de l'Armée Vendénne, November 1997.  Reproduced on La Maraîchine Normande (canalblog.com) post of 02.12.2012 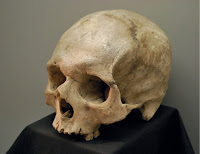 For some time after the Revolution, the head disappeared from view.  There were various rumours. It was thought to have been at one time in the collections of the hospital, the Hôtel-Dieu, in Angers.  Some said it had been initially preserved in esprit-de-vin by a prominent lawyer, Duboys d'Angers but this idea was later considered unlikely.
In June 1838 the skull suddenly resurfaced when a surgeon called Nepveu from Brain-sur-l'Authion, a commune just outside Angers, wrote to inform the Stofflet family that it was in his possession.  He claimed to have owned it for more than forty years and now wished to sell it.  Initially the whole head been preserved with the flesh intact, but in 1811 or 1813 it had been reduced to a skull.  Its authenticity had been verified by many people, including  Duboys and the curé Barbedette, the former chaplain to the Vendean army.  [Letter reproduced in L'intermédiaire des chercheurs et curieux for 1892].
Edmond Stofflet, the general's nephew and biographer, remained doubtful and declined to part with the five or six thousand francs Nepveu asked for the skull.  His various inquiries came to nothing.  Currently for sale on ebay is one of Edmond Stofflet's MS letters; he asks after a book on victims of the Revolution in Anjou, and admits that all the information on the skull he has found so far is "vague and absolutely contradictory".
.
The relic remained for several generations in the Nepveu-Brunetière family.  It was finally deposited with the museum in Cholet in 1995.  The skull has never been subject to DNA testing, but it was carefully examined and is said to bear the mark of the sabre wound that Stofflet suffered during his arrest.
In December 2021, the current owner, Docteur Hervé Brunetière, appeared in a video posted on Facebook in support of the Souvenir Vendéen appeal.  He doesn't add very much circumstantial detail, apart from identifying the original owner as his ancestor Doctor Auguste Nepveu.  Dr. Brunetière says that Nepveu owned the head from 1798, but this is possibly just an extrapolation from the "forty years" mentioned in his letter to Edmond Stofflet. (According to the Cholet museum notes, Nepveu possibly took the specimen out of the Angers hospital in 1803. He is described elsewhere as a "phrenologist".)  After Nepveu's death, the skull passed to his son-in-law Charles Brunetière, who was the grandfather of the present owner.  Dr Brunetière mentions the sabre wound and notes that the relic has remained continuously in the family.   There is therefore a strong presumption in favour of its authenticity.
Is there a face of Stofflet?
Naturally, one of the main attractions of the reconstruction exercise is to compare the results with existing portraits of Stofflet.  As with the other Vendean generals, Charette excepted, there is no known contemporary likeness of Stofflet   Nor is there a known "official portrait" among those commissioned by Louis XVIII.  The iconic image of Stofflet is the lithograph by Zéphirin Belliard, which was one of a set of  Vendean leaders, published between 1824 and 1829.
In 2019 the commercial gallery Pierre Brost offered for sale this beautiful sketch of Stofflet by Robert Lefèvre, the painter responsible for the official portrait of Lescure. The work is signed and dated 1826.  It is speculated that this might be the original for Belliard's lithograph, or even a preliminary study for a full-scale painting by Lefèvre.
I note that Philippe Froesch was working from this image in the January 2022 photo of the reconstruction in progress.
The individual depicted certainly has very definite features -  large intense eyes, prominent noise and small mouth. 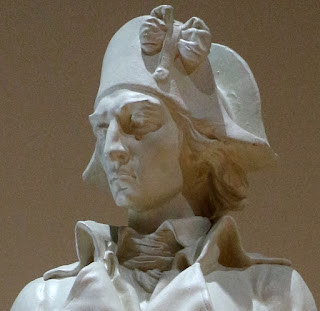 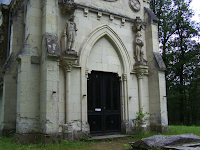 Another early likeness of Stofflet, is the statue which now stands, with that of Cathelineau, on the front of the chapel in the Cimetière des Martyrs at Yzernay near Maulévrier.  The statues date from the 1820s and were installed in the park of the Château Colbert before being transferred to the chapel in 1863. Massin Le Goff, former conservateur du patrimoine and joint-author of a guidebook to the château, identifies the sculptor as  Léon Chapeau. The local historian Michel Lefort has more recently suggested Jacques-Edme Dumont (1761-1844). [L'Écho d'Ancenis 12.12.2021]
However, the source of this image is probably no great mystery. The label at the Historial de Vendée, which possesses a reduced copy of the statue, informs us, that the model was the general's nephew, the brother of Edmond Stofflet, who was known for his resemblance to his uncle.
References
Geoffroy Berthaud "Le visage de Stofflet, ancien général des guerres de Vendée, bientôt dévoilé" L'Écho d'Ancenis  article of  12.11.2021.
Most of the relevant details can be found in online newspaper articles and in the series of posts by "Nicolas Stofflet" on the blog Vendéens & Chouans:
"Le crâne de Stofflet va-t-il disparaître?", post of  17.05.2015
"Stofflet, general vendéen, va révéler son vrai visage", post of  03.11.2021
"Autour de Stofflet : la marche au supplice" post of  24.11.2021
"Autour de Stofflet : le cimetière du Clon",  post of 13.12.2021
Appeal for the facial reconstruction on the fundraising platform Dartagnans.
https://dartagnans.fr/en/projects/stofflet-revele/campaign
For details of the skull and all  sorts of  other personal relics from the Vendée in French collections:
Éric Morin, "Pratiques de transmission de la mémoire vendéenne: l’exemple des objets familiaux confiés aux musées" in  Des guerres civiles du xvie siècle à nos jours - Presses universitaires de Rennes ed. Anne Rolland-Boulestreau,  Bernard Michon [Open access ebook]
https://books.openedition.org/pur/185399