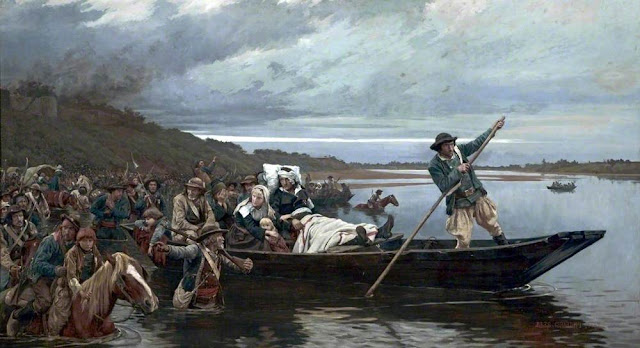 General de Lescure, wounded, crossing the Loire from Saint-Florent with his defeated army

Here is a striking image of the conflict in the Vendée to be admired in an unexpected location!

Girardet's canvas captures the moment when the stricken general Lescure was ferried across the Loire from Saint-Florent, with his wife, daughter and father-in-law.

Lescure had been shot in the head by a musket ball and seriously wounded at  La Tremblaye on  15th October 1793, just prior to the decisive Royalist defeat at Cholet.  He had opposed the crossing  and declared his wish to die in the Vendée, but in the end he had little choice.  He was carried slowly and painfully by his men on the long retreat of the Vendéan army, to die finally at Laval on 2nd November.  His passage across the Loire is described vividly in the Memoirs of his widow, the Marquise de La Rochejaquelein:

When on the morning of the 18th, the officers arrived, the passage was begun.  We had left Chaudron during the night.  M. de Lescure was carried on a bed, which they had covered as well as they possibly could; he suffered dreadfully.  I travelled by his side.  I was three months gone with child;  my situation was shocking.  We arrived early at St. Florent, and then I saw the greatest and the saddest sight which can be imagined;  a sight which never can be effaced from the memory of the wretched Vendéens.

The heights of st Florent form a kind of semicircular boundary to a vast level strand reaching to the Loire, which is very wide at this place.  Eighty thousand people were crowded together in this valley; soldiers, women, children, the aged, and the wounded, flying from immediate destruction.  Behind them, they perceived the smoke rising from the villages the Republicans were burning.  Nothing was heard but loud sobs, groans, and cries.  In this confused crowd, everyone sought his relations, his friends, and his protectors.  They knew not what fate they should meet on the other shore, yet hastened to it, as if beyond the stream they were to find an end to all their misfortunes.  Twenty bad boats carried successively the fugitives, who crowded in them; others tried to cross on horses;  all spread out their arms towards the other side, supplicating to be taken there.  At the distance on the opposite shore, another multitude was seen and heard  fainter.  In the middle was a small island covered with people.

Many of us compared this disorder, this despair, this terrible uncertainty of the future, this immense spectacle, this bewildered crowd this valley, this stream which must be crossed, to the ideas of the Last Judgement.

We were preparing to cross over.  M. de Lescure was wrapped up in his bed-clothes, and he was put on an arm chair covered with a kind of mattress.  We descended from St Florent to the shore in the middle of the crowd.  Many officers accompanied us, and we arrived at the edge of the water. They drew their sabres, made a circle around us, and we arrived at the edge of the water. We found the old Madame de Meynard, who had broken her leg in coming to St Florent;  her daughter was by her side, and begged me to receive them in our boat.  M de Lescure was put in.  M.Durivault, my little girl, my father, our servants, and I, got into the boat.  It could not hold Madame de Meynard's litter; and her daughter would not leave her: - they both remained....

When we were embarked, my father told the boatman who conducted us, to pass the little island, and go to Varades at once without stopping, to save M. de Lescure the pain of being landed and put in the boat again.   The man refused absolutely;  neither entreaties nor threats could induce him.  My father was angry, and drew his sabre.  "Alas! Sir," said the boatman to him, "I am a poor priest;  out of charity I came to ferry the Vendéens over.  I have now been working eight hours in this boat;  I am overpowered with fatigue, and I am not skillful in this business;  I should run a risk of drowning you if I crossed the great arm of the river."

We were then obliged to land on the island, in the middle of the confusion.  We found a boat there which took us to the other side, where there were a number of Vendéens seated on the grass, all waiting for their friends.  My father went in search of my mother.  I sent to a half-burnt hamlet on the edge of the Loire for some milk for my child. (p.279-281)
Memoirs of the Marchioness de La Rochejaquelein (1827)  Internet Archive
References
Entry on National Inventory of Continental European Paintings
https://vads.ac.uk/digital/collection/NIRP/id/28763

According to NICE Paintings, Girardet's picture was donated to the Williamson Gallery in 1951. It was exhibited in the Paris Salon of 1882 and and also at the Exposition Universelle  in 1889,  when it  was listed as belonging to "M. G. Herring of London".  It subsequently passed through a number of hands before ending up at the Williamson.

This blog post has some fine close-up photographs showing details of the painting:  RAMBLES FROM MY CHAIR: The War in the Vendée (scriptorsenex.blogspot.com)