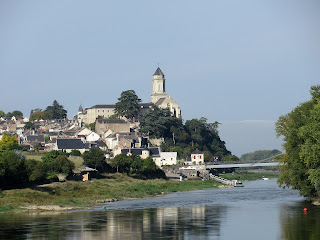 On the way back from Nantes to Dieppe we stopped off at Saint-Florent-le-Vieil, one of the key "places of memory" of the War in the Vendée. The little town, to the north of Cholet, occupies a strategic promontory over the Loire at the entry to the Mauges, later the heartland of the Army of Anjou.  It was here that the war is traditionally said to have begun, on 12th March 1793.

It was only a flying visit - just enough time to take in the atmosphere and see the famous tomb of Bonchamps  sculpted by David d'Angers. 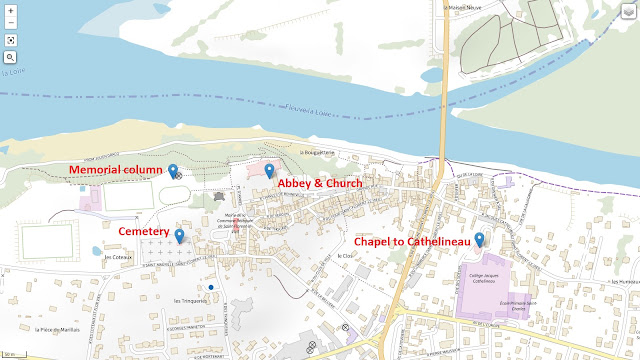 John Haycraft visited Saint-Florent in 1989 in the company of the local historian and ardent Royalist Dominique Lambert de La Douasnerie:
When we asked Dominique about the start of the insurrection, he took us to the little town of St-Florent-le-Vieil, which is not far south of Angers.  Approaching it from the north bank of the Loire, we could see the houses jostling up the hill to a picturesque church with a spire.  Most of St Florent was burnt in 1793.  However, it was rebuilt shortly afterwards, and still looks much like old prints, standing beyond the flat islands in the river, on which tall poplars stand, their small leaves rustling in the breeze.
We stopped beyond the suspension bridge on the Place Maubert.  "It was here," said Dominique, dramatically, "that the war started."
He looked round at the old houses in the little square. "On Sunday March 12th, 1793, on this spot, the municipal authorities announced that lots would be drawn for conscription, as there were insufficient volunteers for the army.  Hitherto, the Vendeans had accepted the Revolution passively, but they were certainly not prepared to leave their farms and fight on distant frontiers for ideals they detested.  They resented, too, that the municipal authorities and the National Guard were exempt from conscription, and that the burden therefore fell mainly on them.  Protesting, the crowd jostled the officials and several young men were arrested and taken to the local jail.
"The following Tuesday," continued Dominique, "more than 2,000 peasants marched into the town, wearing white royalist cockades.  As the confronted the municipality and shouted to them to suspend the drawing of lots, the National Guard panicked and fired.  The crowd then surged forward, and the Guard fled down the slope, just there, to the river."  We walked through a narrow passageway between an old chapel, now a museum, and an ugly, rectangular cinema, and descended a cobbled path through trees to the banks of the river.  Before us, the Loire flowed swiftly past.   "The National Guards took refuge there, on those islands, and the town was in the hands of the insurgents."
"A delegation now set out for the local chateau to implore the Marquis de Bonchamps to be their leader.  Bonchamps had seen service as a major in the royal army in India.  Like most Vendean leaders, he was reluctant to accept, as he regarded the cause as hopeless.  However, after a few hours, he changed his mind and set up his headquarters at St Florent.  From the church steeple floated the white banner of the Bourbons.  The War of the Vendée had begun."
John Haycraft, In search of the French Revolution (1989), p. 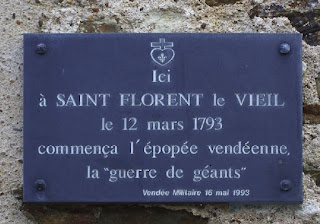 On 29th June 1793, during the abortive Royalist attack on Nantes, Cathelineau was shot in the chest by a sniper stationed in a window in the place Viarme and fatally wounded.   He was evacuated to Saint-Florent, to the former convent of the Cordelier nuns, which now served as a military hospital.  Here he lingered for a fortnight, receiving reports and giving orders. The abbé Cantiteau, who attended him in his final hours, reported that he remained tranquil to the end, content to have given his life in the service of God.   He died on 14th July and was buried in the local cemetery.  He was thirty-four years old.  For a while his death was kept secret, in order not to demoralise his men. According to some accounts, his grave, close to the chapel in the cemetery, was marked by a piece of white flint.

In 1856-58 the comte Théodore de Quatrebarbes, erected a memorial chapel, the chapelle Saint-Charles, on the site of the former convent.  This modest edifice now earns a place in the Base Mérimée as an early example of "neo-Plantagenet" style.  In 1858 the General's remains were re-interred in the chapel, together with those of his son Jacques-Joseph de Cathelineau who had been killed defending the Royalist cause in 1832.
Here are some evocative details from the Revue de Bretagne for 1858:
[I was informed that] a chapel has been built at Saint-Florent in the garden of the former community of nuns where General Cathelineau died in 14th July 1793, having been nursed by Sister Saint-Jean-Baptiste (Mlle Bussonnière, who died at Saint-Florent only three years ago).  In this chapel, M. le comte de Quatrebarbes, who inherited the land, has erected two tombs.  In these have been placed the body of General Cathelineau,  together with remains of his son, who was killed in 1832.  The general had been interred in the cemetery of Saint-Florent by M. l'abbé Gruget, the parish priest, in the presence of M. Gazeau,  Mlle Bussonnière and others.  They were able to show M. l'abbé Courant, M. Gruget's successor, the ditch where the Saint of Anjou lay.  Since no-one else had been buried near him, his bones were found intact.
Can we believe this? There was not even a stone on the spot when the comtesse de la Granville visited the tombs of Saint-Florent in September 1847.  Surprised by this state of abandon, the pious lady sent seven hundred francs to the parish priest to provide a simple gravestone for the general and a perpetual mass to be said each year on the anniversary of his death.
On 23rd June last, M. de Quatrebarbes and M. Henri Cathelineau, the generalissimo's grandson, came to Saint-Florent and carried out the exhumation, without ceremony.  The remains of the father and son were transferred to their tombs in the chapel.
Cathelineau's head, added my esteemed correspondent, the curé of Saint-Florent himself... was very fine, with a wide forehead, similar to the heads which sculptors use as models.
Revue de Bretagne (1856), p. 189-90 [On Google Books]
(Cathelineau posthumous life has proved a little restless, since 1896 he was disturbed once more when a tomb was erected at his birthplace in Le-Pin-en-Mauges and "part of his remains" transferred there.)
[To be continued]