If Saint-Florent saw the beginning of the conflict in the Vendée, in October 1793 it was to  witness its critical turning-point, as the Royalist forces crossed the Loire and turned West at the start of the Virée de Galerne.

On the evening of 16th October at Beaupréau, Bonchamps's plan to extend the war to Brittany had been reluctantly agreed by the Royalist leadership.  A detachment under the orders of Autichamp, Bonchamps's aide-de-camp, successfully secured the commune of Varades on the north bank, directly opposite Saint-Florent, and the way now stood open.   However, the catastrophic defeat at Cholet on 17th October, meant that the crossing took place under chaotic conditions. Both  D'Elbée and Bonchamps had been gravely wounded.  The mass of dispirited troops retreated in disarray first to Beaupréau, then in the evening to Saint-Florent.  On the same night, 17th October, the crossing began.  It continued throughout the next day, principally from Saint-Florent, and Cul-de-boeuf a short distance upstream.  Due to the shortage of boats, huge numbers of Vendeans found themselves crowded together on the riverback. Several thousand Republican prisoners who had been brought into the town were famously liberated by order of  Bonchamps, who was taken across the Loire and died at the village of Meilleraie on the evening of the 18th. 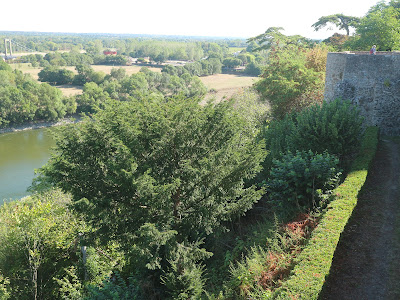 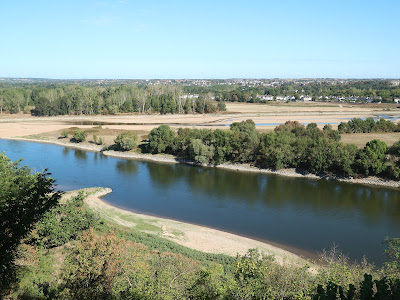 The site of the crossing can be surveyed evocatively from the steep hill of Saint-Florent, surmounted by the Abbey church and the wide expanse of the Place d'Armes.  Below, the Loire is broad and shallow, with a flat bank, which must have been far too small to accommodate the press of people gathered on it. According to Mme de La Rochejaquelein there were only twenty or so boats, though there were doubtless other improvised rafts.  A first branch of the river, with dykes and low water levels, could be forded on foot "with water to half-way up the body".  In the centre was the Ile Batailleuse and then the second branch of the river, whilst at the foot of the hill of Varades, yet a third branch had to be negotiated. The horsemen swam across with their horses. The weather was reported to be cold, but without wind to make waves on the river;  elsewhere it was described as "calm" but with a cold wind.There is record of only one woman ,plus  three horses, drowning.
How many were involved?  The usual estimate is 55-65,000 troops, with a following of women, children and old people; Kléber thought perhaps 100,000 in all.  They brought with them much baggage -  caissons,  artillery, ambulances, provisions - which they were obliged in part to abandon. The report of the Representatives  Bourbotte, Tourreau, Francastel and Choudieu  listed "forty gun carriages, numerous cannons that the Vendeans had thrown into the Loire, as well as flour and corn." There were said to be 500 cannons at Cholet but it was possible to bring only 36 pieces of artillery down river to cross the Loire at Ancenis. Were the rest, including the famous "Marie-Jeanne", spiked and consigned to the Loire at Saint-Florent?  If so, despite numerous searches, they have never been found.

In the winter of 1793 Republican forces reoccupied Saint-Florent, now renamed "Montglonne", which in Spring 1794 became a strategic centre for the deployment of Cordelier's mobile columns . There were mass executions.  Up to two thousand Vendeans, both soldiers and civilians, were shot in the "Champ des Martyrs" near the sanctuary of Notre-Dame-du-Marillais, just outside the town.   On 8th June 1794, the Committee of Public Safety ordered the evacuation of the population to Saumur and the town was burnt to the ground. By tradition only one house, belonging to a baker named Thareau,  remained standing.

In February 2020 the commune announced its ambition to restore the local cemetery.  Among those interred here is Jeanne Bussonnière, the nurse who tended the wounded at the hôpital de Sainte-Croix.  She died at age of 82 in 1854.  Also buried here is Léonard-François Oger (died 1822), the surgeon who attended both Cathelineau and Bonchamps
See:  "Saint-Florent-le-Vieil, l’autre Panthéon de la Vendée militaire", Vendéens & Chouans, post of 14.02.2000.
http://www.vendeensetchouans.com/archives/2020/02/14/38023570.html
Memories of Bonchamps
In 1817, the abbé Mathurin Joseph Martin, parish priest of Montrevault, and former treasurer to the Vendean army, confirmed that it was at 13 Grande Rue, just off the place Maubert, that Bonchamps issued his immortal order to spare the Republican prisoners. [Chaveau Vie de Bonchamps (1817)  Pièces justificatives, no 8]  The property belonged to the wife of a local justice of the peace, Julien René Marin Duval.   In the early 20th century a plaque was erected on the house which now occupies the site.  Tradition has it that the stricken Bonchamps was carried down to the Loire via the adjoining alleyway, wrapped in a fishing net 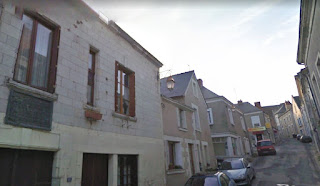 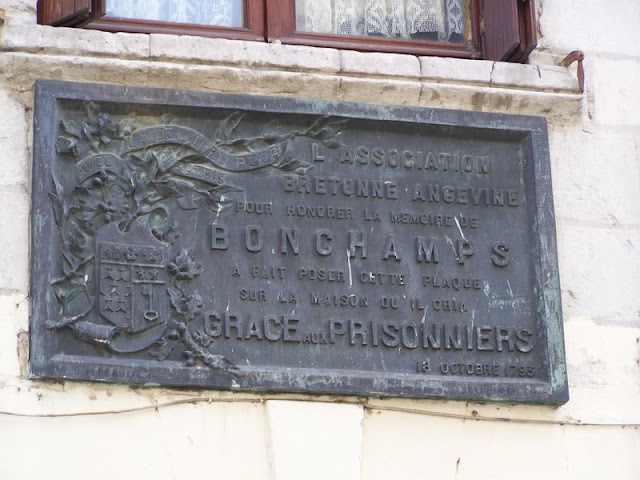 The monument to Bonchamps
The magnificent monument to Bonchamps in the Abbey Church, was installed in 1825. The statue was sculpted by David d'Angers, whose father had been among the prisoners saved by Bonchamps.  The general is depicted half-recumbent, with one hand raised to command attention.  The tomb is inscribed with his immortal command : Grâce aux prisonniers! 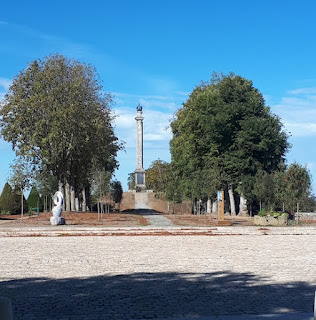 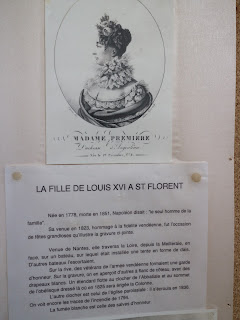 An ancient feudal motte just off the places d'Armes is occupied by a conspicuous memorial column.  It commemorates the visit of the duchesse d'Angoulême, who, on 22nd September 1823 diverted briefly to Saint-Florent on her way from Nantes to Angers. Her arrival was an occasion for great celebration, as the engraving below (also displayed in the church) shows.  The royal party crossed the Loire from La Meilleraie on a boat fitted with a canopied dias, whilst on the bank the veterans of the Army of the Vendée formed a guard of honour. In the illustration, a standard floats from the top of the Abbey Church whilst white smoke curls up from the salvoes of the cannon. A temporary obelisk occupies the site of the later memorial, which was erected in 1828 under the direction of François Villers, an architect from Angers.  Vestiges of the medieval castle survived until 1806. 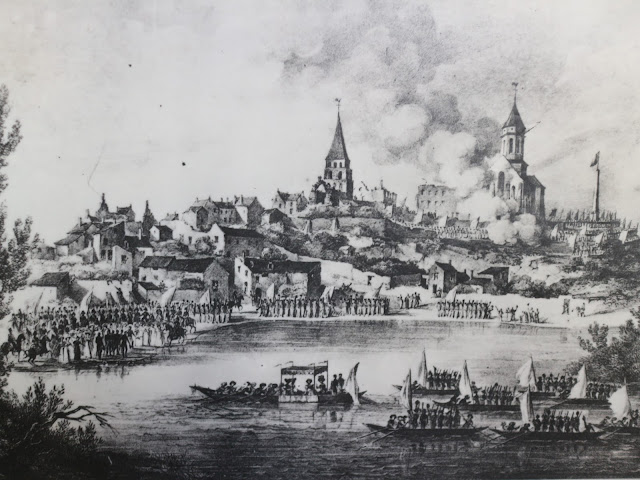