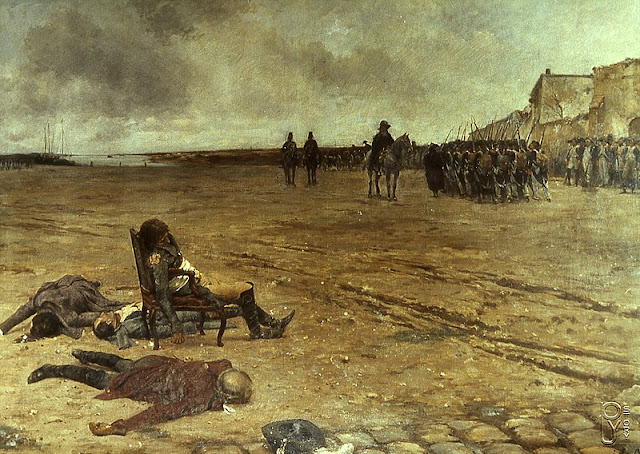 In January 1794 the Vendéen general d'Elbée was executed by Republican Troops in the square outside the castle on the "presqu'île" of Noirmoutier.  The memorable painting by Julian Le Blant evokes a scene of almost infinite remoteness and desolation.

In real life Noirmoutier is not like that. It might not be "always sunny" as the tourist website claims, but in late August it is certainly busy; the cars and camper vans were nose to tail along the main road as we drove in.  Fortunately, as it was late afternoon, even more were pouring out in the opposite direction. We did not dare to stop, even to photograph the picturesque salt pans, and it was with some relief that we secured a parking space and abandoned the car.

Noirmoutier, the port, is a disconcerting mixture of rundown fishing village and chic tourist destination.  But we didn't have time to linger over the shops: it was straight to the castle before closing time.   I liked this one.  It is big and ugly and, as yet, not too impeccably restored.  There is an impressively solid medieval bastion and, in the courtyard, an atmospheric debris of rusted anchors and rotting cannon.  Eighteenth-century houses along the (south) wall once held the governor's lodge and, for a brief time, the Revolutionary administration. 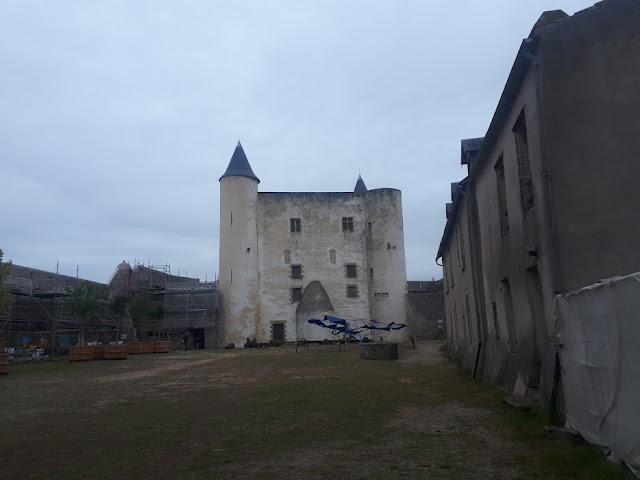 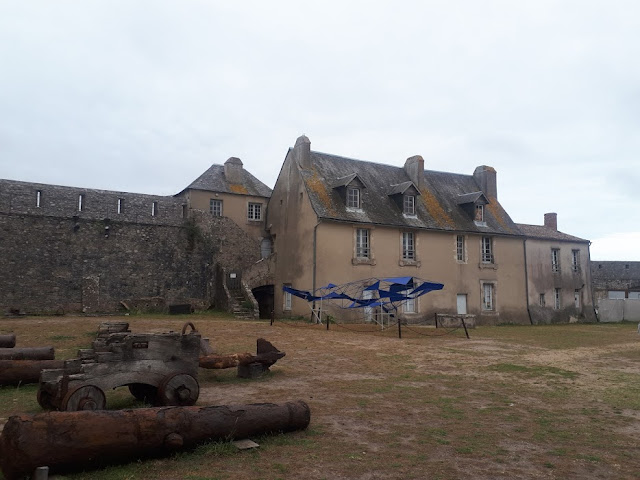 Inside the tower there is an exhibition space and a small permanent display on the history of the fortress.  In the second room hangs Le Blant's painting, and beside it, in a glass case, the prize exhibit - the famous chair in which d'Eblée was shot. 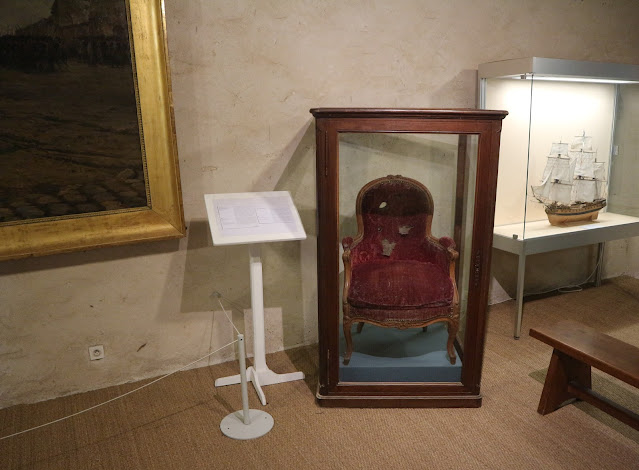 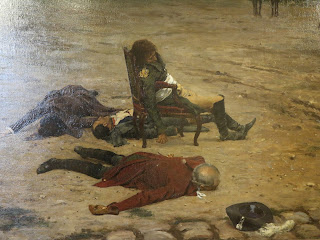 NOTICE: Faced with the advance of Republican troops on the island in January 1794, General d'Elbée was hidden in the Hôtel de la Maduère, located a few blocks from the Place d'Armes.  He was captured and executed with his brother-in-law, Pierre Duhoux d'Hauterive, his friend Pierre-Propser de Boisy de Landebaudière, and the Republican Conrad Wieland, falsely accused of having made a pact with the Vendeans.   They were shot on January 7, 1794.  According to oral tradition, it was from the balcony of the Jacobsen Hotel that the Republicans witnessed this execution.  Julien Le Bland received the 1878 Salon prize for his depiction of the execution of General d'Elbée.  The scene, represented more than 80 years after the fact, is far from reality.  Indeed, the architecture of the castle in the painting has nothing of the characteristics of the one in Noirmoutier.  The chair in the painting does not correspond, either, to the one where the royalist general exposed her was shot. 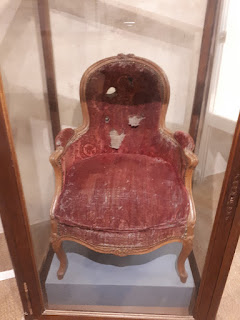 Chair in which d'Eblée was executed
NOTICE:  Wounded during the battle of Cholet (October 17, 1793), General d'Elbée followed the advice of General Charette and came to take shelter on the island.  He stayed at the Jacobsen hotel until the Republicans came to disturb the peace of the Vendeans present in Noirmoutier.  He was then transported to the house of La Maduère on a chair which was also used to bring him to the place of his execution.  In January 1794 a sailor from Banzeau (Noirmoutier) recovered the chair and gave it to Jean-Corneille Jacobsen.  It remained in the Jacobsen family until 1866 when it was entrusted to an heir, the priest Bréau.  In 1882, he offered it to the d'Eblée family.  In 1974 the Marquis d'Eblée entrusted it to the association "Les Amis de l'Ile de Noirmoutier". 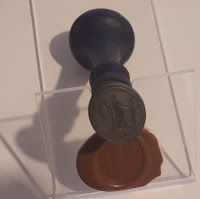 There are various other items relating to the local conflict on display, including the official seal of Noirmoutier in its Revolutionary incarnation as "Isle de la Montagne".

Possession of the port of Noirmoutier was of strategic importance to both sides in the Vendée conflict, but operations here always brought risk, as there was no possibility of retreat from the island.

16th March 1793: The Vendeans, led by Guerry de la Fontinière, were at the gates of the island in Barbâtre, where they joined other fervent Royalists.

16th-17th March: The mayor of Noirmoutier, La Rue de Francy, submitted to the Vendeans; the island was now in the hands of the Royalists. The defences of the island were reinforced against further attack.

April 1793: The Republican army set out to defend the ports of the Atlantic coast;  General Canclaux, commander-in-chief of the Army of Brest, gave the order to retake Noirmoutier at all costs. Before the end of the months General Beysser had assembled 4,000 infantry in front of the Gois causeway.

27th-29th April:  The Republicans prepared a maritime blockade, encircling the island.  Two vessels of 80 cannons, the Superbe and the Achille, anchored at Le Pelier.  The Royalists, fearing a landing, evacuated the island. With only 500 men Guerry de la Fontinière could not mount a defence.  He succeeded in evading the blockade, leaving the island by the Gouet de Fromentine.

Normoutier was  now in the hands of the Republicans.  The mayor of Barbâtre,  Urbain Laurent, was executed.

12th October:  In the space of a few hours, the Royalists led by Charette reconquered the island.  Republican prisoners were shot in Bouin.

2nd or 3rd November:  D'Elbée took refuge on the island.

End of November 1793: Fearing that the English would send aid to the Vendeans, the Republic determined to regain control of the island for good;  an unprecedented maritime blockade was put in place (three frigates, a dozen corvettes, gunboats, luggers and cutters....).

31st December:  Naval forces to the north of the island fired cannon at the coastal batteries of Bois de la Chaise in a ruse to tire the Royalists.   During this diversionary action the frigate La Nymphe was sunk.

2nd-3rd January 1794: Preparations were made for a landing on the island. 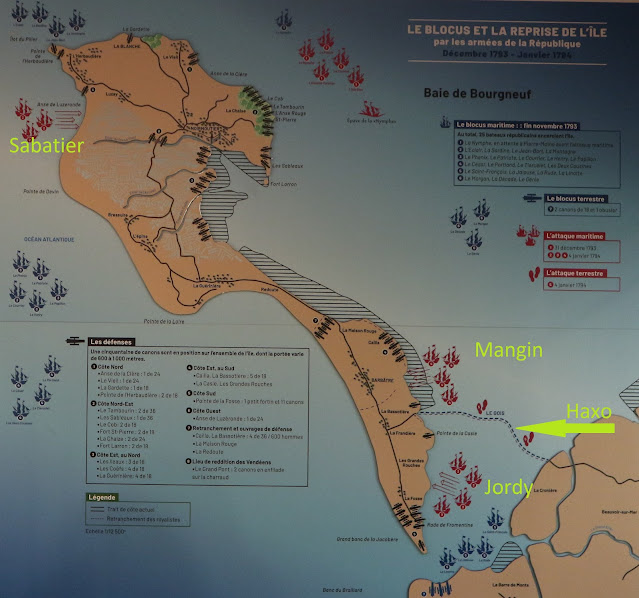 The attack took place during the night with 5,000 men.  The were four forces:

South of  the point of la Casie: 1500 men landed on 15 barges under the command of Jordy.

To the north of La Bassotière: 1,000 men landed on 15 barges under Mangin.

The main force,  2,000 men under the command of Generals Haxo and Turreau, advanced along the Gois causeway to rendezvous with the disembarked troops at Barbâtre.

The Republicans entered Noirmoutier by the Grand Pont.  The Royalists laid down their arms in return for their lives, a surrender which the Republican General Haxo accepted.  Against his word, Haxo then had them imprisoned in the church and shot.

7th January:  D'Elbée was executed on the Grande Place with other Royalists.  The fight  is over for possession of Noirmoutier, now rebaptised L'Ile de la Montagne.

In the months which followed the island was effectively an immense prison, into which prisoners flooded from all over the Vendée.  Others were executed, others died of hunger, cold, exhaustion or disease.  Some were also later liberated. 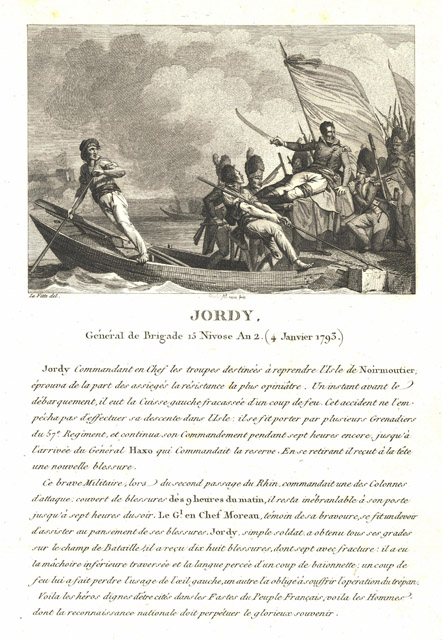 NOTICE:  When the island of Noirmoutier was retaken by the Republicans in January 1794, Nicholas Louis Jordy (1758-1825) was commander-in-chief of the naval troops.  The plan of attack was to throw the Republican troops into the island in three divisions.  Jordy, at the head of 1,200 men, managed to enter Barbâtre.  During the confrontration he was wounded in the thigh and head.  He continued to give orders from a stretcher and was taken to the Jacobsen Hotel.

Modern wooden model of the Republican frigate La Nymphe, sunk during the attack on Noirmoutier. 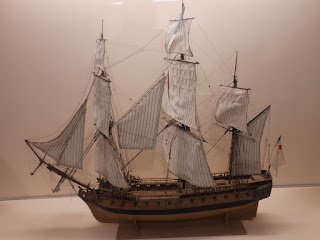 NOTICE:  Built in 1782, the frigate La Nymphe was initially sent to the West Indies.  In November 1784, Lafayette borrowed her to sail to New York.  From 1790 to 1792, she campaigned in the West Indies and in Cayenne.  In 1792 she returned to France in rather poor condition.  Repaired in Lorient, she was armed with 26 12-guns.  In December 1793, she took part in the blockade of the island of Noirmoutier.  Whilst attacking the northern forts of the island, she was hit by several cannonballs below the waterline at ebb tide.  The crew was evacuated.  Her wreck was rediscovered in 2014.

Back outside the castle, the Place d'Armes, where the execution of d'Elbée took place, is completely filled by a massive carpark.  The Hôtel Jacobsen still stands - indeed it was completely renovated in 2019 and opened as a museum.  A plaque on the wall, erected by the Souvenir Vendéen, commemorates d'Elbée and his companions. 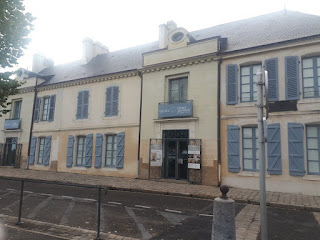 No time to linger!  We wanted to go back across the Gois while the tide was still low.  Predictably we were not alone here either, with dozens of would-be mussel seekers adding to the road traffic.  Nonetheless, the  atmosphere is evocative - close half an eye and you can imagine the grim column of  Republican troops marching silently along the causeway in the bleak morning light of January 1794..... 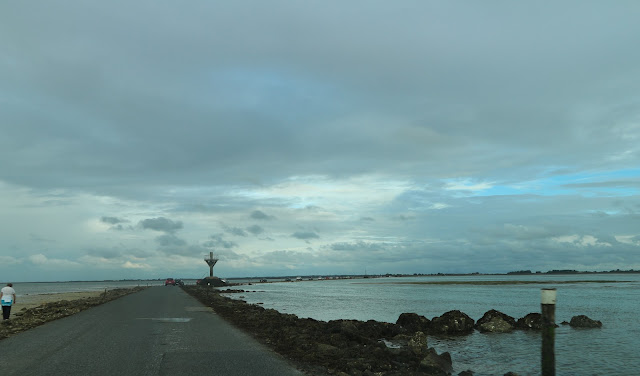