The Vendée - Massacre at Les Lucs 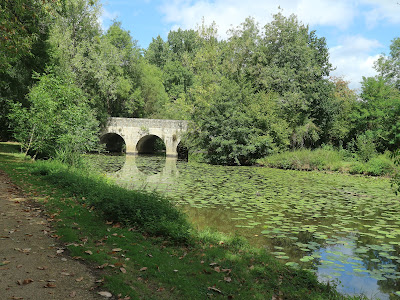 After visiting the Mémorial, we crossed the little river and followed the "chemin de la mémoire" up to the 19th-century commemorative chapel, which stands close to the site of an ancient feudal motte.  There is a great sense of peace here on a bright late summer afternoon. 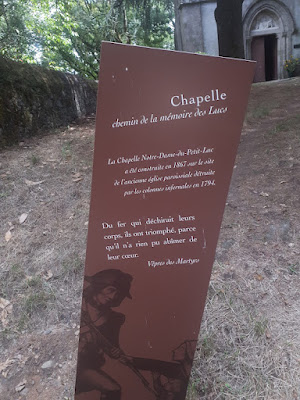 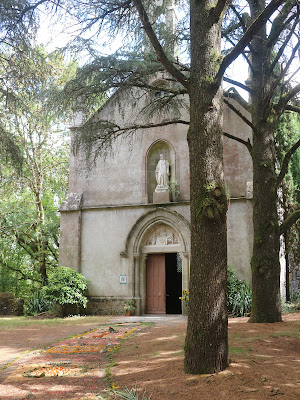 It was in February to March 1794 that more than 500 people were slaughtered in the surrounding area by detachments of the "infernal column" under the command of General Cordelier.

The extent of the massacre was not known until the 1860s.  After the Revolution, the two parishes of Le Luc and Le Petit Luc had been combined and the little church of Notre-Dame du Petit Luc left in ruins. In 1863 the parish priest Jean Bart was excavated building material for a calvary - which still stands on the road towards  Rocheservière - when he discovered human bones beneath the destroyed sanctuary.  According to his account of 1874, musket balls were still interspersed among the remains, whilst fragments of scapulars and rosaries identified the dead as parishioners. We do not know how many individuals were found, nor the circumstances in which they were originally interred.

Some time later, in 1867 or 1872, the famous "martyrology" was discovered in the presbytery.  In this manuscript the refractory priest of Le Grand-Luc and chaplain to Charette, Charles Vincent Barbedette, listed the names, ages, place of residence and professions of 564 of his parishioners, who had been killed by Republican troops, most of them within a few days  of each other at the end of February and beginning of March 1794.  Of  459 surviving names, 80 were men, 127 women between 10 and 49; 124 persons over 50;  most poignantly of all, 127 were children of less than ten years (110 of them under eight).

The document has been described as "perhaps the most overwhelming document on the Terror, the proof of the deliberate, gratuitous massacre of more than 500 unarmed individuals, most of them women and children" [Pierre Marambaud, Les Lucs, la Vendée, la Terreur et la Mémoire (1993), p.9.]

A chapel built on the site of the ruined church was inaugurated in 1867, and a great memorial pilgrimage  took place in 1874.   A moving set of twenty-two plaques, which list the 459 names recorded by Barbedette, was added to the interior in 1937. 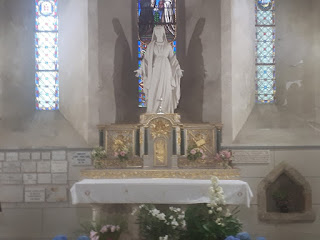 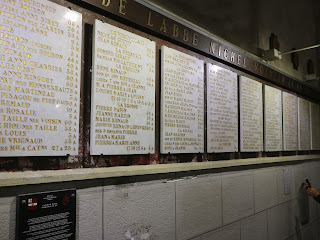 There has been some confusion about what subsequently happened to the remains.  Gabriel Prouteau, who became curé in 1937, finally established that they had been reinterred in the modern cemetery of the commune.  According to a surviving eyewitness they had been transported there in four large chests. The son of the gravedigger was able to confirm the exact location.

It thanks to the abbé Prouteau that in 1946 the cause was introduced for the beatification of the 110 youngest victims listed by Barbedette as child-martyrs killed "out of hatred for the Faith".   (These proceedings seem for the present to have stalled.)  When Prouteau died in 1943 he was buried in the cemetery "among his children"; his tomb remains their only memorial in situ.

Before leaving we briefly visited the parish church of  Saints-Pierre-et-Paul in the main square in Les Lucs to see the stained glass windows which commemorate the events of 1794. 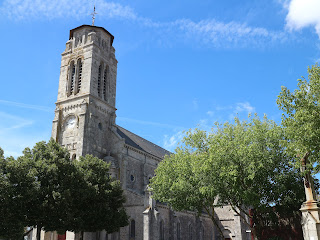 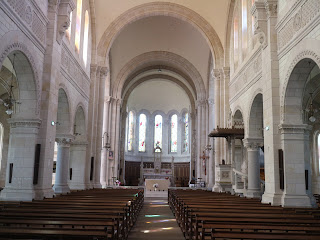 The windows date from the 1940s and were again the initiative of the abbé Prouteau. Those in the transepts show the massacre, interpreted here as a single event which took place on 28th February 1794: 563 of the faithful were killed as they took refuge in their church, together with their pastor, the abbé Louis-Michel Voyneau.  A second set of windows, sited in the nave to echo the Stations of the Cross, depict the life of the abbé Barbedette.  These latter are the work of the Nantes craftsman Lux Fournier (1862-1962). 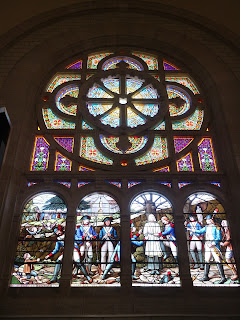 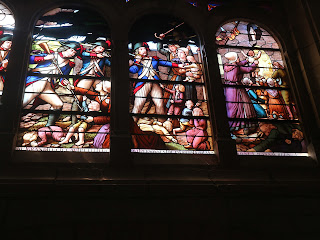 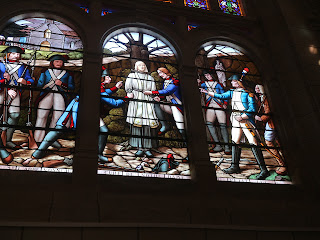 Disputes over the nature of the massacre

The controversy over the "genocide" in the Vendée has inevitably spilled over into interpretations of events at Les Lucs.  As Jean-Clément Martin pointed out, the construction of the Mémorial has privileged this location over older "places of memory" such as the cemetery at La Gaubretière or the site of the conflict at Chanzeaux.  Les Lucs has become the "Oradour of the Vendée".  However, in his view,  the idea of a single atrocity - a massacre of civilians in a church - is a construct of later historiography.  The available documentation suggests that multiple incidents took place over several days in February and March 1794, across the entire parish. These included both skirmishes between soldiers and the murder of civilians.

The essential context was the defeat of Republican forces by Charette at La Vivantière, just outside Les Lucs, which took place on 28th February.  In the late 1970s a number of documents relating to this episode were discovered in the departmental archives of Loire Atlantique, most notably a prosecution drawn by Cordelier against his subordinate Martincourt, whom he held responsible for the defeat.

A report of the Representatives Garrau and Prieur to the Committee of Public Safety, dated 1st March, signals a victory by Cordelier at Les Lucs.  But on 5th March they correct themselves and acknowledge that a setback has occurred.  In 1798 it was finally admitted that 25 men had been lost on 28th February.

The events are reconstructed in detail by the local historian, Father Marie-Auguste Huchet, in his 1983 book Le massacre des Lucs-sur-Boulogne: et, Le martyrologe du Curé Barbedette : étude documentaire.    On 17th February Cordelier had received a report that Charette was at Les Lucs. "Not one man is to be left" commanded the plan of attack issued three days later.  On 28th February, two columns, one led by Cordelier himself, the other by Martincourt, set out from the River Boulogne.  According to the lieutenant François Pelereau, the troops advanced into the woods, "shooting down any men, women or children that they met". This agrees with the testimony of Charette's biographer, Lebouvier-Desmortiers who reports the lurid story that they discovered a woman in labour, cut the baby out from her belly and lifted it aloft with their bayonets.  Cordelier wrote to Turreau on 6th February, that he had executed his orders to purge the area "with iron and fire" and had killed over 600 individuals of both sexes.  [Quoted in Savary Guerres des vendéens et de Chouans, III, p.157].  The soldiers dispersed more and more, so that when they met the volunteers of Charette in the heathlands of La Vivantière, Martincourt's men panicked and fled in disorganisation, creating disorder among Cordelier's troops.  The columns regrouped at Legé whence Cordelier, seconded this time by Rouget, returned the following day, 1st March, to Les Lucs.  It is in this setting that the massacre described in the martyrology takes place.

The abbé's Barbedette's manuscript is therefore best understood as an inventory of those who died throughout the period 1792 and 1794,  a significant number of whom were killed by different "infernal columns" in February 1794 (Martin & Le massacre des Lucs, p.94)  Barbedette himself refers to "persons massacred in different places in the parish of Grand-Luc" and of "dead bodies which lay unburied for more than a month in the fields of every village".

Jean-Clément Martin does not wish to deny the savagery of the soldiery; but he points out that the excesses should be viewed in their particular military context. The Republican army lacked direction and was divided by internal strife.  Les Lucs lost perhaps 300-500 people, 20% of its population, in the course of the war. This, sadly, was by no means an exceptional death toll. 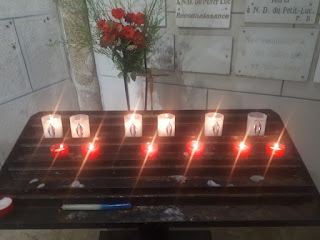