The Well at Clisson 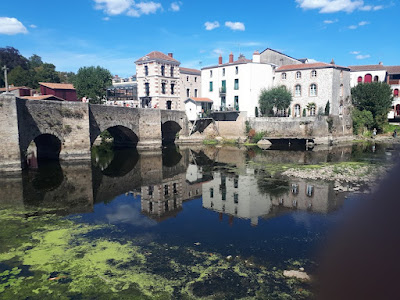 It was a bright sunny afternoon when we visited  Clisson, thirty kilometres south of Nantes.  Thanks to the sculptor Frédéric Lamot, who took up residence there, the little town was attractively rebuilt in the early 19th-century in an Italianate style.  On a warm August day in the holidays, the atmosphere was relaxed and happy, the views over the river picture-perfect.  It was hard to imagine the dark times of Revolutionary conflict.

It was in the cold early months of 1794 that the "infernal column" commanded by General Cordelier reached Clisson. Almost all the buildings were destroyed, the great medieval castle was ruined and much of the population reduced to sheltering in the surrounding woods.  Only the two ancient bridges across the Sèvre and its tributary the Moine were spared, together with the old covered market which served the Republican troops as a barracks.

The château at Clisson, which we now explored, was the site of one of the most notorious Republican atrocities.  On 8th February 1794 a detachment of soldiers discovered and murdered a handful of inhabitants taking refuge in the ruins of the castle.  Eighteen of these unfortunates, some dead, some still alive, were thrown down into the well (or rather the cistern) in the centre of the Cour d'honneur.  The Blues finished them off with cannon balls and pieces of masonry from the walls of the well. 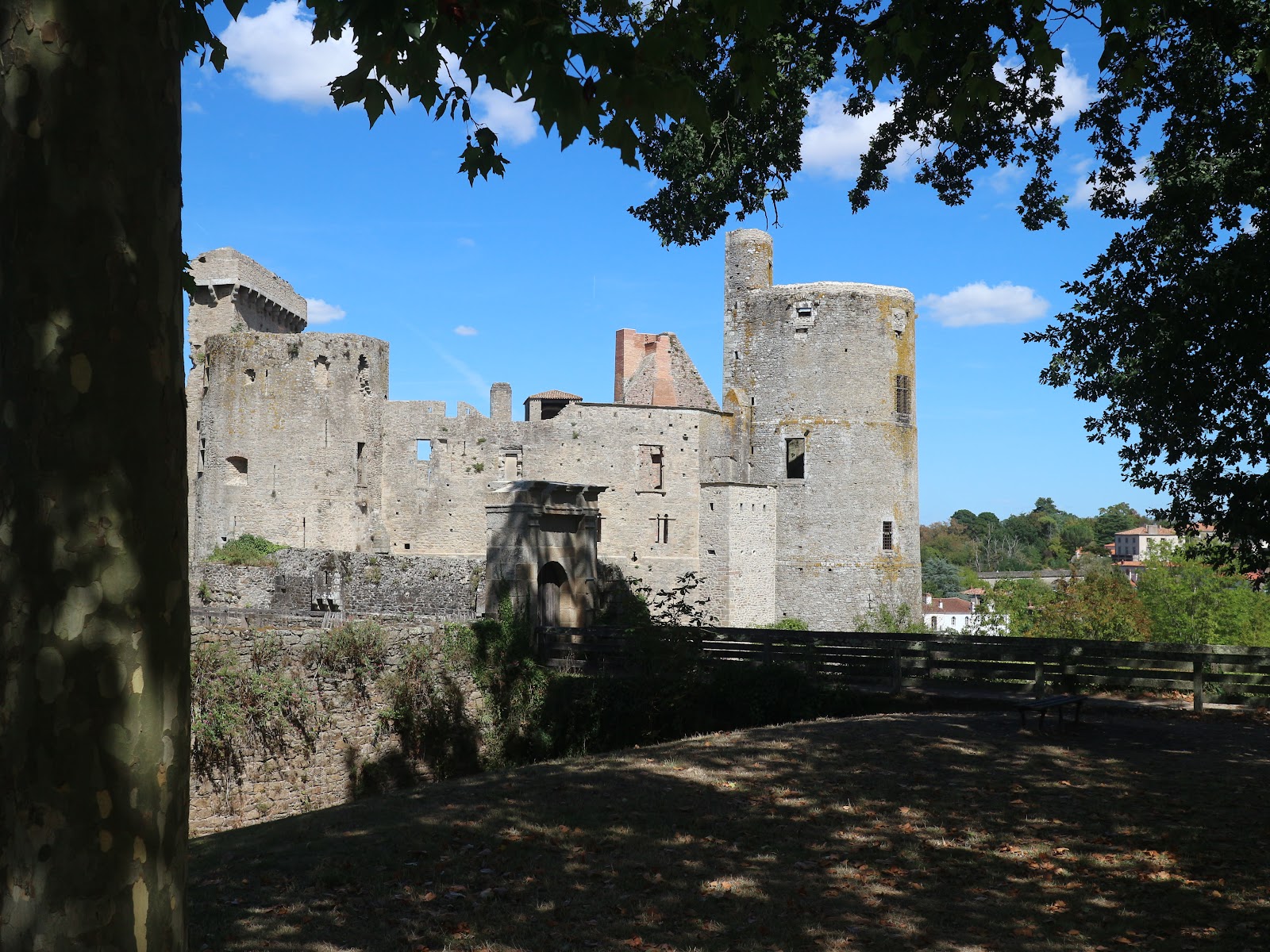 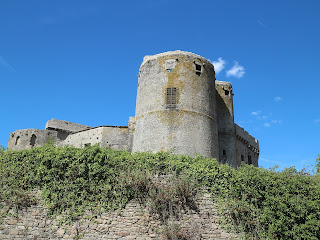 The massacre was always well-attested but - perhaps because a great tree grew up in the well -  no attempt was ever been made to recover the bodies.  The number of victims was often greatly exaggerated, though in 1910 a well-informed local historian estimated 20-25.  It was not until 1961, against a background of controversy over the wars in the Vendée, that the local historian  Doctor Charles Coubard instigated an investigation. The excavations took place on 17th-28th February 1961.  The team first uncovered the masonry and cannonballs that had been thrown in, then the skeletons of 18 individuals, five of them children.   The remains were solemnly laid to rest in the chapelle du Prieué, next to the former church of Saint-Jacques. The association Souvenir Vendéen erected a plaque with the names of the victims, and has also  commissioned a genealogical study.  The results were especially moving as in several cases, the individuals were members of the same family. 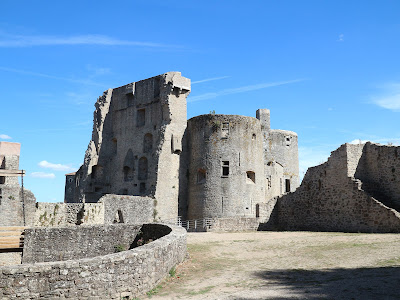 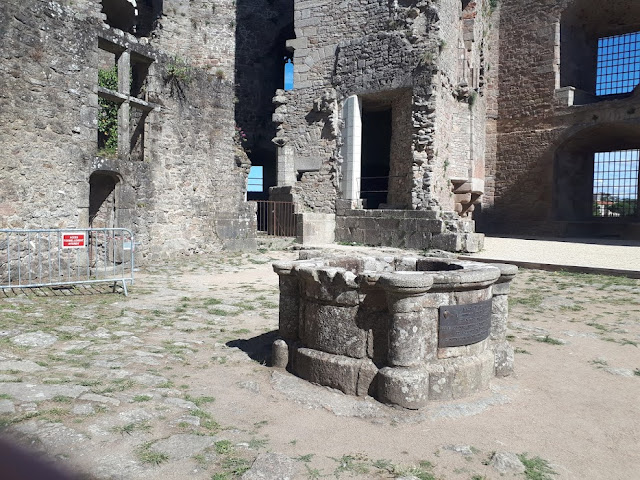 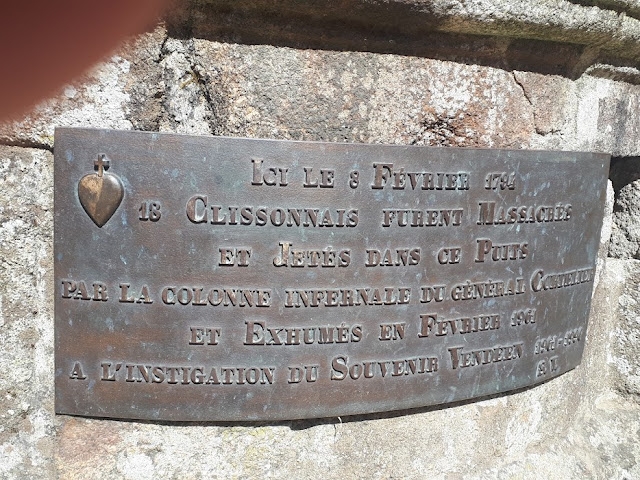 The details of the excavations and commemorations can be found on various posts on the Vendéens et Chouans website: 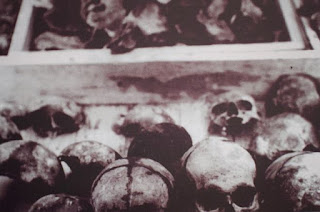 In Clisson, the ruined, massive château has a well in its courtyard, which was excavated in 1961.  The caretaker, who also looked after a splendid garden in the moat, full of blue hydrangeas, remembered this excavation happening when he was a boy.  "A book published in 1910 gave the number of corpses in the well as sixteen, which was exactly the number found.  How did the author know?  Entirely through word of mouth coming down for more than a century.   There were four children, eleven women and one old man, all buried under cannon balls and stones.  Rubbish had been added over the years.  When they dug out the well, they found a tiny, rotted child's shoe among the bones".

"Soldiers saw a light one night.  It was very cold, and a fire had been lit in the courtyard.  The soldiers came over to see what was happening and accused those they found of being rebels, even though they were mainly women and children.  Of course, women and children had helped in the war as scouts, even carrying arms.  But the soldiers were probably drunk.  All the wine-cellars in Clisson had been ransacked."
John Haycraft, In search of the French Revolution (1989), p.188.

Clisson had been reduced to a collection of burned out  houses;  its inhabitants had fled, and all those who had escaped the Blues, wandered aimlessly in the woods. In their distress, a group of women and children, with one man, had taken refuge in the the castle, the ruins of which offered them some shelter.  They did not know where else to hide and did not realise that the  Blues were so close.  One of the women possessed a small amount of flour, a true treasure at that time, which she offered to her companions to make bread.  The oven under the great chimney in the kitchen probably suggested the idea to them.  The man set about collecting brushwood and began to heat up the oven; it was the smoke from the oven which alerted General Cordelier to their presence.

With incredible carelessness, these poor people, had not even thought of posting a lookout to warn them of the approach of troops from the bridges over the Moine and Sèvre,  which were overlooked by the castle.  If this happened, they had the means of escape - via the staircase to the mill, the passageway from the bastion, or even the South gate of the chateau.  Even when they heard the Blues come through the main gate and enter the barbican, they could still have fled via the staircase.  But they lost their heads, and huddled together in an upstairs room where they thought they would be hidden.  The Blues soon discovered them, seized hold of them, and dragged them with jubilant ferocity into the courtyard. The man and several of the women were slaughtered on the spot.  The sight of the great well then gave the executioners the idea for a new torture.  They first hurled down the mutilated bodies of those they had killed, then, one by one, they threw in the rest of their prisoners, who were all still alive.  They danced around the gaping chasm, their obscene songs drowning out the groans and cries of pain from within.

Several authors have recounted this act of barbarism, which was one of the worst atrocities committed by the infernal columns in the Bocage.  Some estimated the number of victims to be as high as 500, others 300, 200, or 50.  However, M. Perraud lived in Clisson in 1850 when there was still one living eyewitness  and several others who had personally known women who had been present and, by some  miracle, escaped.   Through long and patient research, he was able to identify most of the victims.  His manuscript notes reveal a level of circumstantial detail which testifies to his accuracy.  M. Perraud could only find the names of sixteen individuals.  There were probably others, who remain unknown; but according to the witnesses questioned, there were certainly no more than twenty or twenty-five.

Poignant scenes took place in the interior courtyard of the chateau on that day.

Two sisters managed to escape when the soldiers arrived.  One took the underground passageway to the mill, then the staircase from the bastion. The other threw herself thirty feet from the great East window and broke her leg, though she came to no further harm.  A soldier who spotted her, took pity on her.  In the evening he returned secretly, bound up her leg with a piece of his sash, and carried her to the boundary of the town.  She was able to to drag herself to a wood, where she was taken care of by peasants and survived the Revolution.

Among Cordelier's troops, were men who killed only out of fear and had not lost all feelings of humanity.  Perhaps they had been conscripted by force.  In one of its sweeps, the column took prisoner in La Bruffiere a man who recognised among the Blues one of his former friends from when he had been a baker in Paris..  The soldier was forced by his comrades to shoot his friend, which he did in tears, having first embraced him.
In front of the well a little girl of five was spared by the executioners, not because of her beauty, since she had been disfigured by smallpox, but because they were moved by her innocence and infantile chatter.  Standing by the body of her grandmother, she called them her "tontons" (uncles) and they did not have the heart to kill her.  She was taken to Nantes with the column, and abandoned in the streets [where, after some tribulations, she was presently reunited with her family].
Paul de Berthou, Clisson et ses monuments (1910), p.391-93.
Available at: http://www.odile-halbert.com/Paroisse/Loireat/Clisson/Clisson.H-Ch05.pdf