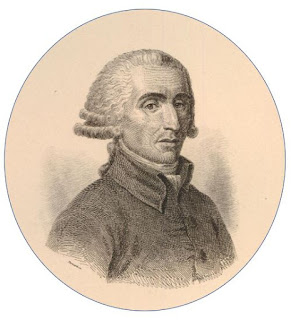 Cérutti is an interesting character.  An inveterate writer and versifier, he started out his career as a Jesuit schoolmaster, but later became a prominent Revolutionary journalist.  (It was he who delivered the eulogy at Mirabeau's funeral in 1791) . In the 1780s he had various aristocratic patrons, and had clearly been charged with composing inscriptions and mottoes for the garden at Betz.  His poem, which was no doubt originally intended for the entertainment of the princesse de Monaco's guests, was modelled on the abbé Delille's highly popular Les Jardins, our l'art d'embellir les paysages (1782).  André Hallys has no difficulty in finding plenty of anti-clerical and anti-despotic sentiments in the text.  [Most prescient was the final comment in Cérutti's  notes to the poem: For two hundred year, France has been pregnant with revolution; she will give birth before the end of the century.]

The Temple of Friendship

Upon the right bank of the stream stands a ravishing edifice. It is the Temple of Friendship, the most beautiful and, fortunately, the best preserved of the structures of Betz, which alone, the chateau having been destroyed and the park disfigured, is sufficient to immortalize here the memory of Madame de Monaco. Among the great trees which make an admirable frame for it, it presents the four columns and the triangular gable of its Neo-Greek façade. It is the most charming and the most elegant of the Hubert Roberts—a marvellous setting for an opera by Gluck. As we ascend the grassy slope, we savour more vividly the exquisite proportions of the architecture, the sovereign grace of the colonnade, the nobility of the gable, and also the strange beauty of the pines which enframe the masterpiece. (These trees with red trunks and twisted shapes made an important part of the decoration of all English gardens. Introduced into Europe for the first time in the gardens of Lord Weymouth, in Kent, they are called by the landscapists of the times Weymouth pines, or more briefly, Lord pines.)
Formerly, a wood of oaks extended on both sides of the temple; it was cut in the nineteenth century; the hillside is now partly denuded; this is very unfortunate, for the picture conceived by Hubert Robert has thus been altered. Nevertheless, the essential feature of the landscape is intact, for the Weymouth pines still shelter the access to the peristyle.
Under the colonnade, between two statues, opens a door of two leaves on which are sculptured fine garlands of flowers. Within the temple, along the naked wall, Ionic columns alternate with truncated shafts which once supported the busts of the heroes of friendship, and nothing is more original than the oblique flutings of these pedestals. Coffers of singular beauty decorate the ceiling, in the midst of which an opening allows light to enter. About the edifice runs a cornice, the design of which is at once rich and delicate. A charming marble bas-relief decorates the top of the doorway. The rear wall curves back between two columns to form a little apse, raised by two steps: its curve is so pleasing, its dimensions are so just, the arch of the demi-cupola which shelters it is designed with so much grace, that we experience, in contemplating these pure, supple and harmonious lines, that ravishment of eye and soul which only the spectacle of perfect architecture can produce. Before the steps is placed a round stone altar. In the little apse, we might have admired until recently a plaster reproduction of Love and Friendship, the celebrated group which Pigalle carved for Madame de Pompadour, the marble of which—much damaged—belongs to the Louvre. M. Rocheblave, who saw the statue in the place where the Princess of Monaco had placed it, and who has written very interestingly about it affirms, and we can believe it, that this cast of the original, made and lightly retouched by the sculptor Dejoux, was a unique work, infinitely precious. It has been removed from Betz; but it will soon be replaced by another cast of the same group. The divinity will recomplete its temple.
On the pedestal of the statue appeared this quatrain:
Wise friendship! love seeks your presence;
Smitten with your sweetness, smitten with your constancy,
It comes to implore you to embellish its bonds
With all the virtues which consecrate thine.

And on the wall of the apse this was engraved:
Pure and fertile source of happiness,
Tender friendship! my heart rests with thee;
The world where thou art not is a desert for me;
Art thou in a desert? thou takest the place of this world.
This last motto is by Cérutti. 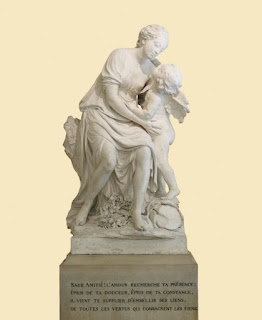 Pigalle's L'Amour et l'Amitié, was commissioned by Madame de Pompadour in 1754, and acquired after her death by the prince de Condé.   The plaster cast, sculpted by Claude Dejoux, which once stood in the Temple of Friendship at Betz is now in the  Walters Art Museum, Baltimore.
The inscription translates:
Wise Friendship, Loves searches for your presence,
inflamed with your sweetness, inflamed with your constancy.
Love comes to supplicate you to embellish its bounds
with all the virtues which are consecrating yours.
https://art.thewalters.org/detail/19001/lamour-et-lamitie-love-and-friendship/
The cast of Love and Friendship is not the only object which has disappeared from the temple of Betz. There was also there a "circular bed," where meditation invited "Romantic Love and Ambitious Hope" to be seated.

This "circular bed" was also a poetic invention. A document, discovered by M. de Ségur in the archives of Beauvais, shows us that Cérutti was commissioned to "furnish" the Temple of Friendship. As his archaeological knowledge was insufficient, he addressed himself to the author of the Voyage du jeune Anacharsis. We possess the reply of Abbé Barthélémy. The latter seems quite embarrassed: he states that the ancients prayed standing, on their knees or seated on the ground, and that there were no seats in the temples; he thinks that one might take as a model either the curule chair of the Senators, or the throne on which the gods were represented as seated, or even a bench, a sofa.... "Besides," he ended, "I believe, like M. Cérutti, that as friendship is a goddess of all times, we may furnish her as we will." Quatrains, sensibilities and puerilities, all these do not prevent the temple of Betz from being one, of the most perfect works of the Greco-Roman Renaissance of the last years of the eighteenth century. 27 In the gardens of the Little Trianon, Mique produced nothing more exquisite than this work of Le Roy. And how adorable they are, these little monuments, supreme witnesses of classic tradition, suddenly revivified by the discoveries of the antiquaries, by the Voyages of the Count de Caylus, by the first excavations at Herculaneum and Pompeii! With what surety of taste, with what subtlety of imagination, have the lines and the forms of ancient art been accommodated to the adornment of the northern landscape! It is the last flower of our architecture.

It is necessary to hearken to and meditate upon the instruction, the eternal instruction given us by this temple so gracefully placed before the verdant meadows of a valley of the Ile-de-France. The caprice of a sentimental princess dedicated it to friendship. Let us dedicate it in our grateful thought to the strong and charming god whose decrees were respected and whose power was venerated for three centuries by poets and artists without an ingratitude, without a blasphemy. This sanctuary was doubtless the homage of a disappearing piety: already those who built it celebrated in the neighboring groves the rites of a new cult; there they deified disorder, ruin and melancholy; there they abandoned themselves to childish and dangerous superstitions; already romanticism and exoticism mastered hearts and imaginations. The more reason for admiring and cherishing the last altars where men sacrificed to reason, order and beauty. Besides, behold: a century has elapsed; the false ruins are ruined; the false tombs are no more than rubbish; the Chinese kiosks have disappeared; yet, upon the hillside, the four Ionic columns still show the immortal grace of their spreading bases and their fine volutes.

Marbles broken and dispersed without arrangement.
The Graces sometimes came to rest themselves there
Seated near these benches, we easily forget ourselves;
Voluptuousness follows the shadow and melancholy....

Melancholy was not the only visitor to this charming retreat. Let us rather listen to the Prince de Ligne describing the "baths" of an English garden. His prose will console us for the verses of Cérutti: "Women love to be deceived, perhaps that they may sometimes avenge themselves for it. Occupy yourselves with them in your gardens. Manage, stroll with, amuse this charming sex; let the walks be well beaten, that they may not dampen their pretty feet, and let irregular, narrow, shaded paths, odoriferous of roses, jasmines, orange blossoms, violets and honeysuckles, coax these ladies to the bath or to repose, where they find their fancy work, their knitting, their filet and especially their black writing desk where sand or something else is always lacking, but which contains the secrets unknown to lovers and husbands, and which, placed upon their knees, is useful to them in writing lies with a crow's plume."
With this pleasing picture, let us leave the gardens of Betz.
References
André Hallays, The Spell of the Heart of France (1920)
https://www.gutenberg.org/cache/epub/46321/pg46321-images.html#link2H_4_0015
Antoine-Joachim Cerutti, Les Jardins de Betz, poème (Paris 1792)
Les Jardins de Betz - Google Books
Gabriel Wick, "The Princesse de Monaco, Hubert Robert and the invention of the ‘Vieux château’ of Betz", Studies in the History of Gardens & Designed Landscapes (2017), vol.37(4): 304-320. [Open Access article]  https://hcommons.org/deposits/item/hc:19217/
The entry for Betz on Dominique Césari's website,  Jardins anglo-chinois du XVIIIe siècle dits parcs à fabriques, includes a good collection of old postcards
http://www.parcsafabriques.org/cartespo/carpo13.htm [postcards]
And here are some high-quality photographs of the Temple of Friendship:
https://bibliotheques-specialisees.paris.fr/ark:/73873/pf0001779356