In 1780 Marie Catherine de Brignole-Sale, princesse de Monaco bought the ancient feudal domain of Betz  in order to be close to her exiled lover, the prince de Condé, in nearby Chantilly.  Between 1782 and 1789 she constructed a Renaissance style château, with a park inspired by the latest taste in landscape design. The result is acknolwedged to have been one of the finest examples of French  picturesque garden.
The park at Betz has had a quite  different fate from the parks at Ermenonville or Méréville, both of which are now in public ownership. The 70 hectare estate, in the commune of Betz, some 60 kilometres north-east of Paris, now belongs to no less a personage than Mohammed VI,  King of Morocco.  Although the park is classed as "national patrimony" it is not just  completely private -  it is hidden behind high stone walls and patrolled by armed guards....
After the princess emigrated in 1789,  Betz was abandoned.  It was bought in 1810 by speculators, then passed through the hand of a succession of proprietors. Fortunately,  in the early 20th century it  acquired a second attentive chatelaine.  Bought in 1905 by  a Paris notary called Vincent, the estate remained in the careful stewardship  of his widow until her death at the age of 94 in 1958.   In 1960s its Norwegian owner converted it into a nursing home, then a hotel.  Finally in 1972 the estate was  acquired as a holiday retreat by Hassan II of Morocco.  The château, which had been entirely rebuilt by Madame Vincent, remains unaltered, with its Belle Époque exterior though it is said that the new royal owner preferred a more oriental style interior decor.  Adjacent to the main house he built a substantial pavilion for his son and he imported a couple of European railway carriages.  He is also credited with the construction of a nuclear bunker. Mohammed VI himself has added stables for his horses, which he races at Chantilly and  Compiègne.
Like the monied aristocrats of the Ancien Régime, the royal residents of Betz have sought to gain acceptance from the local residents by extending their largesse to the nearby commune.   The village school and social amenities have been generously supported; there is even a school exchange programme set up with Morocco.  Mohammed also earned the approval of the Philippe Boulland, mayor of Betz between 1995 and 2004, by his employment of local craftsman.  This has resulted in a certain local tolerance of the secrecy and elaborate security measures.
In  July 2020 Mohammed acquired an 80-million Euro pad near the Trocadero, but we are assured he does not intend to abandon his country retreat in Betz.
It is hard to know precisely how much of the original 18th-century ornamentation survives today.  The King has an extensive staff, perhaps 60 persons when he is in residence, but they are strictly sworn to secrecy concerning the estate -  as are the local workers, who are paid several times over the odds, and maintain their discretion.  The visitor can see little from the outside, apart from the massive stone wall.  However, the park is clearly well maintained and retains its original plan.  On the road out of Betz by the north-west, the ruined "gothic tower", one of the original fabriques, is said to be visible in winter.  Other landmarks, the Temple of Friendship and an obelisk commemorating American Independence, were known to survive in the 1960s and can possibly be glimpsed in aerial views.

Fortunately the history of the park is well documented,  though it is a shame that the only available images are engravings and old postcards.  The American expert Gabriel Wick has recently shared on Academia an article in English which present his new research on Betz, focusing particularly on the "gothic" landscape features.
Dr Wick explains that by the 1780s, fashionable "picturesque tourism"  had abandoned the taste for  imitations of English gardens and chinoiserie in favour of themes from French national and local history.  Garden fabriques acquired greater archaeological verisimilitude, sometimes by the reuse of  genuine antique sculptural elements.
The design for Betz was the result of a collaboration between the former tutor to the Dauphin and garden theorist, the duc d'Harcourt and Hubert Robert. The parkland is traversed by the River Grivette, which was diverted to create a large central lake, with a series of islets linked to the shore by ornamental bridges. On the south bank the tone was conventionally Arcadian.  There was an eclectic series of follies - a chapel, a kiosk, a pavilion. At the centre, stood a Temple of Friendship, which housed a  copy of  Pigalle's famous statue L'Amour et l'Amitié -  a transparent reference to the supposed "passionate friendship" of the Princess and Condé.  A nearby column commemorated the Norman crusader knight Tancrède de Hauteville. Plates from Alexandre Laborde's Description des nouveaux jardins (1808):
The Temple of Friendship in the Park of Betz
On the summit of a hill is seen the front of a little temple of the Ionic order, of a simple architecture, and that agrees agreeably with the mass of trees which surrounds it .  At the foot of the hill flows a rivulet that adds to the embellishment of this pretty landscape 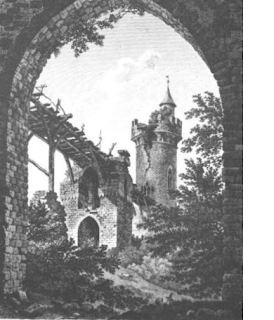 The Ruin in the Park of Betz
There is nothing more interesting, no aspect nobler than the ruins of those old castles which rear their heads over the country, and seem to preserve yet the pride of their ancient inhabitants.  These dark dwellings form a striking contrast with the smiling landscapes around them;  and, when their imitation is executed on a large scale, in a garden, it always produces a remarkable effect (p.171)
The north bank, which contained the gothic elements, was densely wooded and intended to induce a darker, more melancholy mood.  A series of  fabriques were themed on a historical pastiche involving the (fictional) medieval knight Thibault de Nanteuil and his lady.  Vestiges of a vast chateau arose from the undergrowth.   A monumental stair and ruinous walkway led to a "gothic tower", 14 feet in diameter and 132 feet high, the interior of which incorporated a  bas-relief by the 16th-century sculptor Jean Goujon. So convincing was the gaping breach in upper part of the tower  that Bertrand Barère, who visited in 1788, feared that the edifice was about to collapse.  Further on a "Valley of Tombs", continued the narrative, with elements salvaged from the dismantled the burial ground of Les Innocents.  At the edge of the park a ruined gothick chapel and a hermitage-cum-grotto, with resident hermit, completed the tour.
References
Maxence Eloi, "Mohammed VI et son château picard : entre Histoire et petits secrets" Le Point, article of 25.08.2017
https://www.lepoint.fr/societe/mohammed-vi-et-son-chateau-picard-entre-histoire-et-petits-secrets-25-08-2017-2152180_23.php