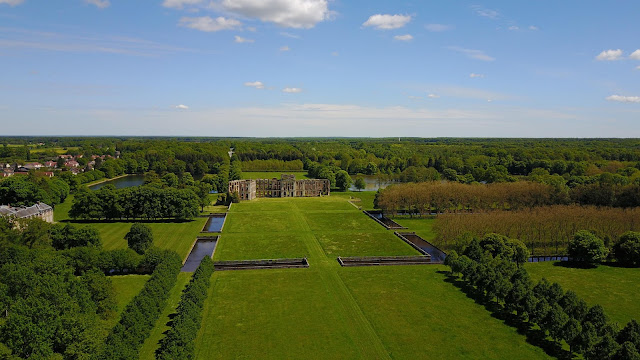 This  evocative ruin, is all that remains of the once magnificent château de la Ferté-Vidame, in the department of Eure-et-Loir, the property of the fabulously wealthy financier, Jean-Joseph de Laborde.  Eighteenth-century writers argued long and hard over the moral status of riches, the merits of luxury,  the worth of artistic patronage...  This battered ghost reminds us that, for one generation at least the answer to such questions, was to be brutally decided by the guillotine and the wrecker's hammer.
Laborde acquired la Ferté-Vidame in the Eure from the heirs of the duc de Saint-Simon in 1764 at a cost of 1,550,000 livres.   His son Alexandre later reported that the estate brought an annual revenue of 120,000 livres from wood and 100,000 livres from its farms, agricultural land, mills and ponds. In a letter to Choiseul of 1765 Laborde expressed his satisfaction at acquiring a historic house, "d'une forme mâle et antique", even though it would require extensive embellishment.
The Rouen architect Antoine Matthieu Le Carpentier was immediately commissioned to begin building work. The medieval foundations were retained,  conserving the original semi-hexagonal plan, and two wings added, set at an oblique angle to the main building to form a magnificent cour d'honneur, with huge wrought iron gates,  which rivalled that of Versailles.  The work took three years to complete, at an estimated cost of 14 million livres.  Such mansions lend themselves to impressive statistics :  the main façade is 150 metres long, there were 167 rooms, and the park covers 860 hectares, surrounded by a wall of 13 kilometres.  The garden, also designed by LeCarpentier,  was one of the last formal gardens "à la française".
In the event, Laborde did not get to enjoy La Ferté for long; in 1783 he was obliged, as a courtesy to Louis XVI, to sell the property to the duc de Penthièvre, whose own estate at Rambouillet, with its excellent hunting, was coveted by the King. 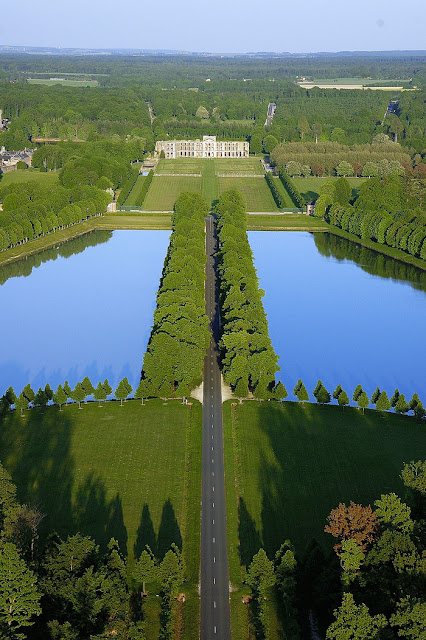 In 1793, after the death of the duc, the estate was inherited by his daughter Louise-Marie-Adélaïde, Duchess of Orléans.  As an emigrée, her property was forfeit, and in March 1798 La Ferté fell into the hands of a speculator, Jean Cardot-Villers.  The sales inventory of 20th November 1797 reports that the fabric of the château was already damaged.  Now it was further dismantled and a substantial number of the trees on the estate felled.  After the Restoration, from 1826  the property reverted to Louis-Philippe, duc d'Orleans.  In the later 19th and early 20th centuries,  it passed through a series of different owners.   In the 1940s  the grounds were used a test centre by Citroën, who still retain a track there.
La Ferté was bought for the state in 1991 and is now maintained as a public park by the department of l'Eure-et-Loir.  The commune of La Ferté-Vidame particularly emphasises the connection to the Saint-Simon family, with an attractive modern museum in the Maison Saint-Simon on the edge of the park.
The ruins of the great house have been stabilised, though they still cannot be entered,  due in part to a protected species of bats which has taken up residence  in the cellars.  In 2019  "a vast project of reconstruction" was begun to renovate so-called petit château, the stable block and apartments,  at cost of 4.5 million euros. The intention is to boost tourism, by providing accommodation, restaurant and tea-rooms.
Here is a cool drone view of the château posted in 2015 on YouTube; must take quite a lot of mowing!
Life at La Ferté
To recover a sense of La Ferté's lost splendours requires quite feat of imagination. We know, from surviving records,  that the château's interiors were decorated and furnished at vast expense in the fashionable taste of the day.  For the gallery or the grande-salon Laborde ordered eight enormous canvases from Joseph Vernet on the theme of the four times of day.  Vernet was paid 50,000 ecu but prohibited from exhibiting his work, which provoke Diderot to condemn Laborde as a "modern Midas".  (Laborde later relented and the paintings were exhibited in the Salon of 1770). Further decorative work was entrusted to other contemporary French masters: Lagrenée the Elder was commissioned to provide huge decorative panels, as well as many small paintings to go over the doors.  [Delmas (1995), p.61]  As we are shown in one YouTube video,  guests  enjoyed every modern convenience, including a hot water system, the flues for which still survive.
In 1997 a  team of architects, directed by  conservateur en chef  Gérard Mabille, created a series of digital reconstructions which used the inventory drawn up in November 1797 to give a glimpse of the sumptuous interiors. The  images below were posted on an archived version of the La Ferté website:
https://web.archive.org/web/20030118012425/http://www.cc-la-ferte-vidame.fr/histoire/chateau.HTML
I'm guessing they originally appeared in this guidebook produced in 1998 by the Amis du Perché 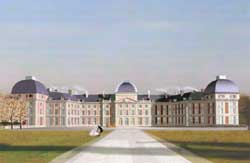 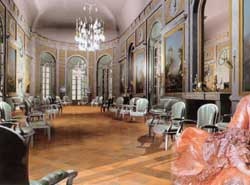 More than the lavishness of the surroundings, contemporaries remarked on the hospitality they received Laborde who was a generous and engaging host. Courtiers and Princes of the Blood, Royal ministers, men of letters - all found their way to La Ferté.
The following is translated from a manuscript account, published in 1989, by Alexandre de Beauharnais, the first husband of the Empress Josephine, who contrived to dine with Larborde in the summer of 1782. He was staying at the time with a friend in nearby Verneuil-sir-Avre.

An excursion from Verneuil to La Ferté-Vidame in August 1782

...the idea came to us... to go and see a beautiful and celebrated château,  which strangers often visited out of curiosity.  This was La Ferté-Vidame, the magnificent estate belonging to Mr de la Borde, the former Court banker and the richest private individual in France.

It was almost eleven o'clock in the morning when the idea came to us, and it already seemed too late to admire everything and be back in time for dinner. One of the servants, seeing our hesitation, repeated what he had hear said in the kitchen:  that strangers who found themselves at La Ferté at meal times, were always invited to dine by M. de la Borde.  This gave us hope and we were intrigued by the idea that we could count on receiving hospitality. We planned to show ourselves at the windows of the château, and to do all that we could to attract the attention of the master of the house.  I still laugh at all our fears and precautions.  I thought we should take my friend's cabriolet because it had springs.   I forced him to change his old uniform coat en route, which he did, and we duly arrived at La Ferté, a distance of three leagues from Verneuil.

Since we ordered our coachman to go into the Courtyard and make a lot of noise with his whip, the porter at the gate asked us our names.  He took them in writing to Mr de la Borde, leaving us transported with delight at the success of our plan....It was Mr de la Borde personally who came to reply, with an offer to eat at his table.  We accepted quickly and gratefully.

Before dinner he gave us a conducted tour of the apartments. On the ground floor was a dining room with green and white stucco and the gallery or grand salon which had been added to the garden-side of the house... This gallery was decorated by superb Vernets; the two which hang at the crossing of the room must be among the chefs d'oeuvre of this talented artist.....

Works by M. Langrené the Elder, the current Director of the Academy, adorn the salon where the guests meet; these paintings are in poor taste, with an excessive use of colour...

Finally time for dinner arrived and we sat down table, enjoying ourselves marvellously;  I was constantly about to burst in laughter at the memory of our little worries and a nudge of the knee of my companion at each dish.;  after this boufonerie subsided and was succeeded by gratitude towards our hosts and admiration for the spectacle of happiness offered by the household.

Usually, when one is not born into fortune and luxury, riches create an unbearable arrogance;  this is the reproach commonly made against financiers.. Since M. de la Borde was worth 30 million, I expected to find him thirty times more arrogant.   Instead I saw only a simple and affectionate goodwill, and a bonhomie that I found charming. The two hosts, sitting at a corner of the table, distinguished themselves only by allowing themselves to caress in public, and the little attentions with which they showered us.

After dinner, a game of billiards was proposed and we had the humiliation, my friend and I, of being bested by the  Mademoiselles de la Borde and de la Live.  After  that they desired to show us the park, which we toured, partly on foot and partly by coach, with the women.  The walkways reveal  magnificent courtyards preceded by two stretches of water. The parterre leads equally to vast water features and to the left, a jardin anglais, which would be my delight if I lived here.   It was large, varied, imitating nature, and was noteworthy above all for the freshness of its green lawns, watered by a pretty stream that wound through it.... The walkways of the park were wide and enlivened by winding paths and plantations of trees (les 'bosquets'), as described by the abbé Delille in his  Poème des Jardins: the prettiest had been named after Mr de la Borde's daughters....

I should not forget the evening.  Almost until supper the time was devoted to music...After supper we continued a game of loto; this was a pleasant diversion, but its end signalled the end of this happy day, despite the entreaties of our gallant hosts.   We left for Verneuil,  both saddened that so agreeable an excursion had to finish....
Les Chatelains de La Ferté vidame de 1765 à 1784 (saint-simon-la-ferte-vidame.fr)