I have a bad habit of finding interesting exhibitions several years after they have closed.... 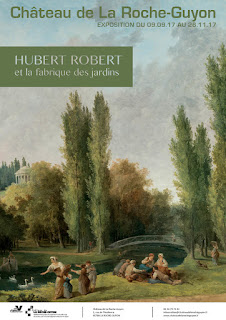 Here, before the notices disappear from the internet, are some notes from a exhibition on Hubert Robert as "composer of landscapes", which took place in  Autumn 2017.   The exhibition, curated by Gabriel Wick,  was held in the beautiful and dramatically-located Château de la Roche-Guyon, in the Vale d'Oise,  which is owned by the La Rochefoucauld family.

The exhibition offered an opportunity to present some of the new research of Gabriel Wick and others on Robert's less-well known garden projects -  at the Château du Val, the Hôtel de Noailles in Saint-Germain-en-Laye, at Betz, and, above all at La Roche-Guyon itself.  It brought together some  sixteen paintings, thirty four drawings and a number of architectural models and published works from both private and public collections.  Also featured were  photographs  by Catherine Pachowski of the surviving fabriques - many of which are now in poor state of preservation.

The exhibits were set out in  the public rooms of the Château on ground floor overlooking the grounds.  Also offered were tours of the remnants of the jardin anglais at Laroche-Guyon - which has since been opened to the public on a regular basis..

The Gallery: View of Normandy

Outline of Robert's life;  paintings for the Archbishop of Rouen showing views of the Normandy countryside.

The Chabot-Rochefoucault family were among Robert's earliest and most longstanding patrons. The gallery showcased four new reproductions of paintings commissioned by Archbishop Dominique de la Rochefoucauld in  1773 for the the State Rooms of the archiepiscopal palace in Rouen.  The series depicts various views of Normandy:  Le château de Gaillon, and the towns of Rouen, Dieppe and Le Havre. 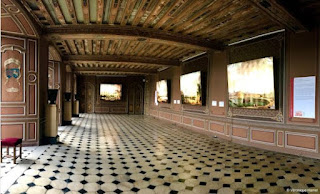 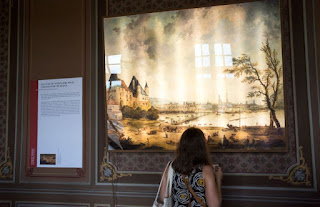 The Billiards Room.  Promenades from Rome to Normandy

Works from Hubert Robert's eleven years in Italy, or inspired by them.  Views of gardens, monuments and ruins, which informed his work as a landscape artist. 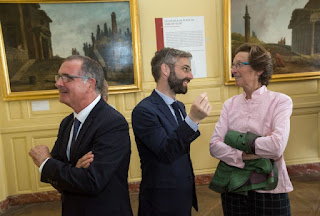 Above and below:  A pair of dessus-la-porte from the Archbishop's Palace, showing imaginary antique landscapes.

Small "grey" salon:  At the service of the La Rochefoucauld and Chabot.

Robert's major painting of the Château de La Roche-Guyon, as well as drawings made over many visits.  Also the drawings of his students. 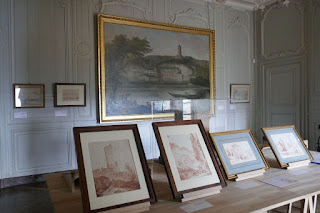 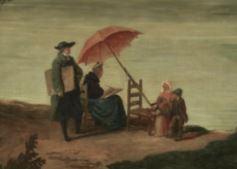 This room continues the history of Robert's associations with Laroche-Guyon and the Rochefoucault-Chabot family. In the 1770s the duchesse de Chabot established a private academy in the rue de Seine in Paris, where Robert acted as drawing master.  Mozart famously complained that members were so engrossed in their work that he found himself “playing for armchairs, tables and walls…” In summer, the aristocrat amateurs would meet outside at Laroche-Guyon to sketch.
I notice that there is a painting with a similar view of Laroche-Guyon at Ickworth House in Suffolk: https://www.nationaltrustcollections.org.uk/object/851850 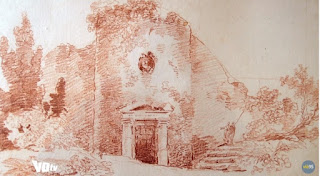 Views of the tour de Guy, c. 1776.  Collection of the Vicomte de Rohan 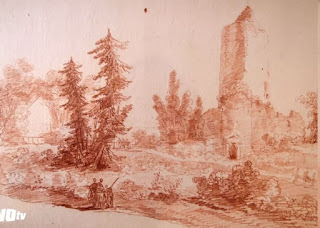 In the mid 1760s the duchesse d'Enville began work on the park adjoining the Château. Between 1764 and 1791 Robert contributed to a series of hillside promenades.  He created a number of fabriques and landscape features, including an ambitious twenty-five metre cascade, which were built by the architect J. Marc Borel.  In 1776-78 the forbidding 12th-century keep, the "tour de Guy"was integrated into the design.   Sarah Catala and Gabriel Wick have discovered four drawings by Robert which show him working on the transformation of the tower, which was given a false Grecian style door.

Small boudoirs in the Square Tower:  The Royal gardens.

Pieces illustrating Robert's landscape projects at Versailles and other royal properties, notably Rambouillet.  Also the drawings of his collaborators in these projects.

Thanks to the sponsorship of the comte d'Angiviller, the Director of Royal Buildings, Robert was given several prestigious royal commissions. In 1777 he designed at Versailles a new setting for the sculptural assemblage known as "Les bains d'Apollon". This is represented in the exhibition by several drawings and a painting.

The design features a huge artificial rock outcrop, with the figures placed at the entrance to what appeared to be a vast subterranean grotto, intended to represent the mythical Grotto of Thetis, the last resting place of Apollo.  The bosquet is one of the few landscape features by Robert to be fully restored:

The laiterie at Rambouillet, one of Robert's last projects before the Revolution, was completed in 1787-88 by the mason entrepreneur Jacques Jean Thevein. 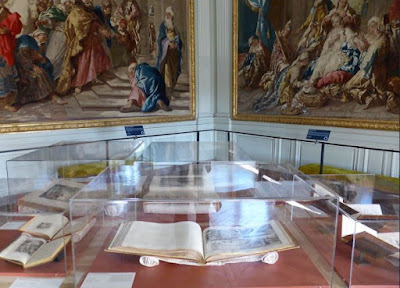 This grand space, with its splendid Gobelin tapestries, was the centre of sociability in the eighteenth century.  The exhibition invited us  to imagine the long exchanges which took place here between the duchesse d'Enville, Robert  and other guests such as the poet abbé Delille and the theorist  of gardens, Jean-Marie Morel.

Drawings by Robert and his contemporaries illustrating the design of garden structures.

The  projects by Robert featured in this part of the exhibition included the pyramid-grotto created for the marquis de Montesquiou-Fezenasac at Mauperthuis and the mock medieval fortress at Betz. 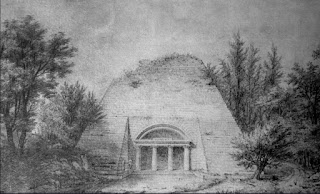 Chambre de Zénaïde:  Robert at Méréville
Six of Robert's major canvases were gathered together for the first time. 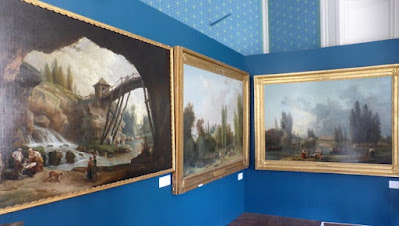 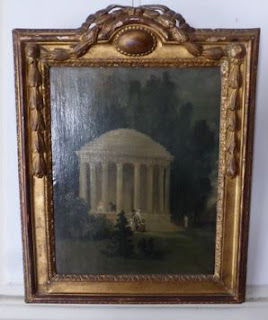 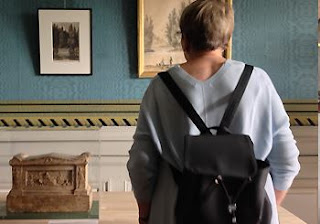 The exhibits in this room explored the theme of remembrance, as an element in the new genre of landscape design.   Robert's design for the tomb of Rousseau on the "Isle of Poplars" at Ermenonville, completed in 1781, is represented by a maquette and several drawings and engravings.  Robert revisited this location obsessively in numerous studies.

Also included later views of the  "Élysée de Mauperthius",  created by the architect Brongniart, possibly with Robert's participation, a memorial to the "illustrious dead". 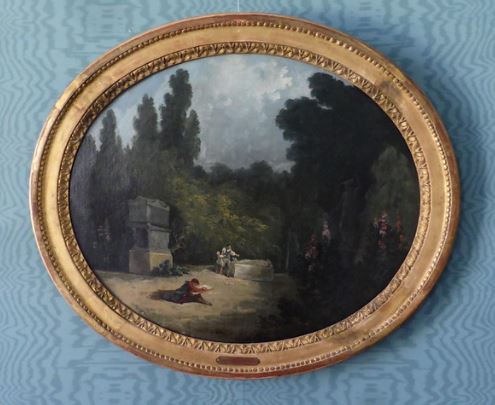 In the library.  The legacy of Roberts work.

Shown particularly through the photographs of Catherine Pachowski 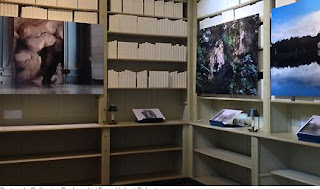 Gabriel Wick, Rediscovering a ‘Composer of Landscapes’ : A new exhibition seeks to revive the legacy of the ‘Robert des Ruines’, Garden History, issue 36.. [[pdf. available to download from Academia.edu]

This essay, and many of Gabriel Wick's other relevant papers, including his contributions to the published exhibition catalogue can be found on Academia:
https://nyu.academia.edu/GabrielWick/Papers
Some bloggers who made it to the exhibition!:
Johanna Daniel, "Les jardins pas si imaginaires d'Hubert Robert" Orion en aéroplane [blog] post of 16.11.2017. http://peccadille.net/2017/11/16/jardins-imaginaires-dhubert-robert-2/
Laure de Gramont, "Hubert Robert is back at la Roche Guyon", Paris Diary by Laure [blog] post of 25.10.2017.https://parisdiarybylaure.com/hubert-robert-back-la-roche-guyon/