In this video you can see the actress Catherine Deneuve starring (in English) in an new, unexpected role, that of "godmother" to an 18th-century garden!

The garden in question is the park at Méréville, near Étampes, which, like La Ferté-Vidame, once belonged to the financier Jean-Joseph Laborde; The restoration is yet another ambitious and ongoing French heritage project

Laborde acquired the estate at Méréville in 1784, shortly after he had surrendered La Ferté-Vidame.  He employed the most renowned architects of the age - François-Joseph Bélanger and Hubert Robert "of the ruins" -  to collaborate with him on the design of the park.  The result was one of the last, and finest, of the naturalistic  jardins pittoresques, of the pre-Revolutionary years, admired by contemporaries, along with Ermenonville and the gardens of the princesse de Monaco at Betz.

Sadly, Laborde was granted little time to enjoy the fruits of his efforts and within a few years of  his death, the park had become neglected. The estate was sold by Laborde's widow in 1819 to a mason, Despagnac, who set about emptying the château and demolishing the stonework. It was temporarily rescued in 1824 by the comte de Saint-Roman,  but gradually fell into further disrepair under his successors.  In the park, trees were destroyed and, in 1896, significant monuments sold off; thus by a strange quirk of fate the  magnificent follies created by Hubert for Méréville now adorn a completely different stately home and gardens, the chateau de Jeurre, twenty-five kilometres down the road.

There is not much to be discovered about Méréville's 20th-century history, but it in the late 1990s there was alarm when an Japanese company announced plans to buy it and converted it into a golf-course.  Thanks to a successful campaign led by Laborde's biographer  François d' Ormesson this fate was averted, and in 2000 the 58-hectares site was acquired by the Conseil général of the department of  Essonne. Restoration work has been ongoing since 2016 in both the park and the chateau itself, which was in some danger of collapse. The garden is now open to the public without charge in the summer months.  In 2018, the first year of opening, it attracted 20,000 visitors. According to the conservators, the park is being restored with an effort  to conserve not just the remains of its past glory but "the accidental beauty of what it has become" - an aim which chimes well with the garden's original aesthetic.  Care has also been taken to preserve the ecological value of the site.

So far the tab is in excess of five million euro.  For those interested in such things, the effort is an exemplary case study in creative fundraising:  The initiative has benefited from celebrity backing: The Fondation Essonne Mécénat, instituted to support the renovations, has Stéphane Bern as one of its patrons. In 2017 Stéphane's " grand loto du patrimoine" yielded 200,000 euros for the park.  In 2017 too, Catherine Deneuve gave her name as "godmother" to the fundraising effort.  There have also been several successful appeals for corporate and individual sponsorship. In the latest scheme you can adopt a gilded ball or pearl mirror which will be part of an ambitious replica of one of the garden's lost bridges, the Pont aux Boules d'or, which is being designed by the Parisian artist Jean-Michel Othoniel ( article in Le Républicain de l'Essonne, 08.08.2020)

In May 2021 a new plan was approved by the  Conseil départemental which pledged the considerable sum of 10.2 million euros towards further, thoroughgoing restoration. 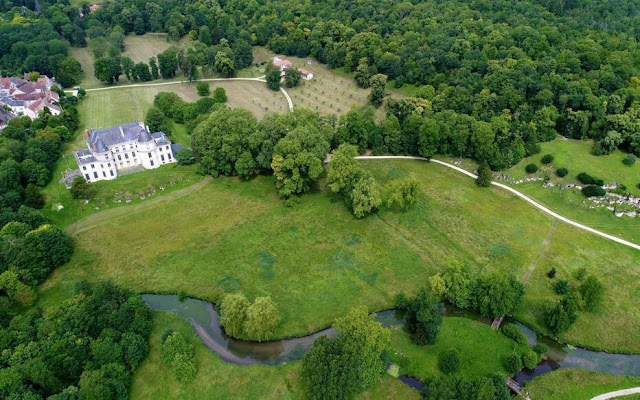 Laborde and his park

There a lot written about Méréville.  The English reader is referred particularly to the beautiful and scholarly guidebook written by the Paris-based American historian Gabriel Wick, with photographs by Éric Sanders.  The author has generously made this freely available on Academia:

Laborde acquired the estate at Méréville from the first with a view its potential for embellishment. Already aged sixty, he had been obliged to leave behind the magnificence of La Ferté, and once again had "all to do" .

The  architect commissioned to transform the house was Jean-Benoît Vincent Barré, who had worked for Laborde for twenty years on his Parisian residences. He elected to preserve its "caractère romantique", creating an eclectic mixture of styles, a modern take on the feudal castle.   Bélanger, who had designed Bagatelle and the Folie Saint-James, was  initially tasked with the new park, but Laborde found him a difficult collaborator and in 1786 replaced him with the more amenable Hubert Robert.  The latter continued along the broad lines laid out by his predecessor, but brought his own style to the finished garden, with dramatic landscaping and  fabriques - garden structures - which echoed the imaginative ruins of his painted capriccios.

Following the accepted wisdom of the time, the design for the park sought to preserve and enhance the natural features of the landscape. The bowl shaped "grand parc",  covering 90 hectares, is traversed from north to south by the river Juine.  The waters were diverted, widened and endowed with islands. The marshy ground was stabilised with imported gravel and huge quantities of rocks brought in to create landscape features and grottoes. The work continued for nine years, until overtaken by the Revolution, and, at times, involved up to  four hundred labourers. Two hundred and twenty-five different species of exotic plants are inventoried, among them Virginian tulips and North American conifers, which were imported at vast expense.   According to Alexandre Laborde, the financier's son,  the final effect resembled  "the Oasis of Ammon, situated in the middle of the desert".(Description, p.98)

The unifying imaginative concept at Méréville was a passion, which Laborde shared with his contemporaries, for remote and distant places -  stimulated  both by the discovery of the American wilderness,  and by  new visions the past uncovered by archaeology:  "No other French garden built in this period materialized the suddenly expanded horizons of the 1780s better than Méréville" (Wick, p.67).   Visitors were invited to enjoy vicariously the experience of travel, via recreated mountain passes, bridges and seemingly natural grottoes; Laborde even placed small boats on the river at their disposal.  A cenotaph to Cook and  the memorial to Laborde's sons, killed on the La Pérouse expedition,  added a sombre note and evoked ever more remote and unknown worlds.

Unusually for a French attraction, there isn't a  good practical modern map for visitors to download on the internet.  The plan in Gabriel Wick's guide (p.12-13) is very clear, although it includes monuments that are destroyed or no-longer in situ. The plan on the website, by Dominique Césari, lists in more detail monuments which survive (at least in 1990) and those which have disappeared or been translated to Jeurre. http://www.parcsafabriques.org/mere/mere4.htm

The park on Google Earth: 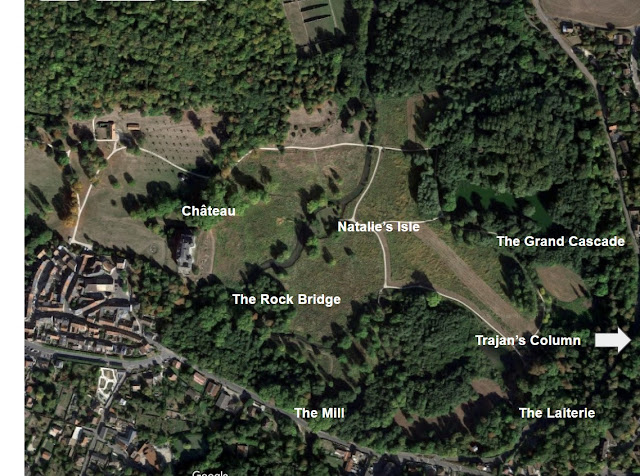 By way of a virtual promenade, the Department of Essonne has has recently posted several short 360° webcam videos on Youtube:
In the Park:  https://youtu.be/41yJh-zju4A (six videos on autoplay)
https://youtu.be/gxZ7IhIBJxY
This video shows the interior of the château - not as far gone as La Ferté-Vidame, but still quite a project!
The poster of this video has (probably illicitly) penetrated some of the surviving  grottoes:
"Les secrets du parc du château de Méréville"  https://youtu.be/n98LZt8GNi8
Other surviving features:
The Rock-Bridge  (See Wick, p.20-21; 26).   Video:  https://youtu.be/HsoP1cEoEIk

The "Grande Cascade" - not much water pressure nowadays, but can still function on special occasions. 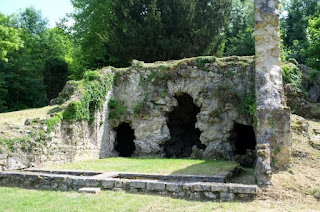 The 35 metre-high Obelisk or Colonne Trajane, created by Bélanger, is an exact scale model of Trajan's column in Rome.  It is situated in "le petit parc", separated from the main garden by a public road,  and came into the possession of the Department much earlier than the rest of the domain, in 1937.  It is in  a relatively good state of repair and, with permission, can be ascended to enjoy the panoramic views.
Brochure: Mairie de Méréville - Vie Associative - Tour Trajane (quomodo.com)

At the Château de Jeurre

In 1896 proprietor of Jeurre, the sculptor Alexandre Henri Dufresne Comte de Saint-Léon  (1820-1903) acquired five of the major fabriques at a public action organised by Prudent Carpentier, the timber merchant who then owned Méréville.  From the old photographs on the Jeurre website, the structures were indeed in a miserable condition. They had to be taken down and the stones numbered one by one, then transported by ox cart - an operation that took almost fifteen years.  They can now been seen in a good state of preservation, though lacking the original dramatic settings.

The Rostral Column & Cenotaph of Cook

At Méréville the rostral column was situated on a small island known as "la Californie" because of the many trees transplanted to give the effect of the western coastline of North America. It was intended as a landscape of mourning.  Alexandre Laborde noted particularly the transplanted sea thorn with its "pale and sad colour".

A second island simulated Hawaii, scene of Cook's death in 1779.  The exotic flora which surrounded Cook's cenotaph aimed to reproduce "the wild and distant countries that conceal the veritable tomb of this illustrious voyager".